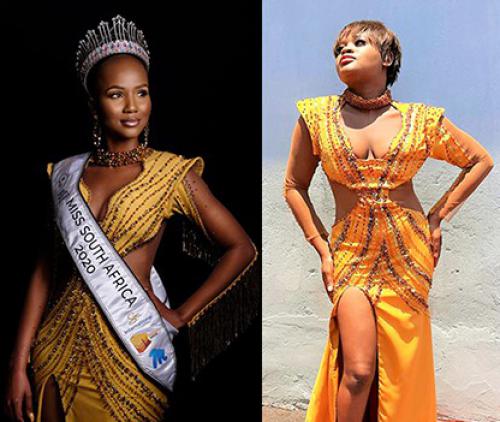 When a young fashion designer from Mukula village outside Thohoyandou decided to spoil herself with a dress for her birthday this year, she ended up designing an outfit similar to the one that Miss SA, Shudufhadzo Musida, wore when she was crowned.

Gudani Negondeni, known by many as Gneg, celebrated her 24th birthday on 8 November. When she posted a picture of herself wearing the dress on Twitter, it stole the hearts of many, including Miss SA herself, who re-tweeted the photo with the caption “Yassssss honey!” and tagged the original dress designer, Orapeleng Modutle.

Gneg said the response from the public was amazing. “People loved and shared it, and I gained more trust from my clients and customers,” she said. “The re-tweet from Miss SA was the best birthday gift ever!”

Gneg started her fashion-designing career when she was very young. She used to knit traditional attire and make beads. In 2016, she studied electrical engineering at Gert Sibande College in Mpumalanga. “I chose the course for the sake of going to school, but I never enjoyed it because my heart has always been with fashion designing,” she tells. “That’s when I registered for a clothing production course at Vhembe TVET’s Makwarela campus,” she tells. She finished her course in November 2019.

Gneg is proud to be working full time from home as a fashion designer today.