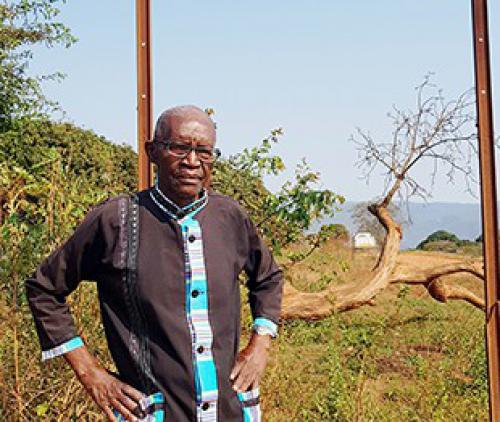 I erect my own monuments, says mbila musician

“If I don’t honour myself now while I live, who else will honour me? People will wait for you to die and honour you with something you would never see with your eyes. I am happy that my move is supported and well received by the local traditional leadership.”

These are the words of Vhavenda Vho-Jutas Kanakana Mathoho (82) of Tshiombo village. The old man, who is famously known for his hand piano- (mbila) playing skills, has named a street that leads to his house after himself. He went the extra mile by using his old-age grant to pay for the printing and installation of a sign board at the local main road.

He said the idea came when he realised that many people, including journalists and tourists, got lost when they visited him. “I get visitors from around the country, and it was important for them to get a clear direction to my house. Besides that, I want to write my own history while I am still alive. Those who understand history will agree with me that you cannot talk about the village of Tshiombo without my name. I was the first person from this village to record mbila music in 1977. It was tough back then, but I managed to have my music played on Radio Venda. Apart from being an experienced farmer, I have also raised the flag of this village by getting various traditional music awards,” said Mathoho.

Affectionately called JK Mathoho, he says he deserves high honour because he was also very active in building his community through sports. “I started one of the highly acclaimed soccer teams around, Tshiombo XI Securitas, in 1979. The team kept young people from the streets and some of them grew up to be responsible leaders in various fields. I ran the team for years from my own pocket and it produced professional players such as Eric Mulomowandau Mathoho.”

Tshiombo village’s traditional leader, Musanda Vho-Ratshilumela Ronald Tovhowani Mathoho, said he fully supported and approved the naming of the street after JK Mathoho. “He is a very good man who respects traditional leadership because he is also from a royal family. He came to me to ask for permission and my blessing before he erected the signboard. After erecting it, he came back and reported that everything went well. We are very proud of him because he keeps on putting our village on a global map for the right reasons. In fact, we regard him as a legend whose positive contributions to the development of this community will never be forgotten.”