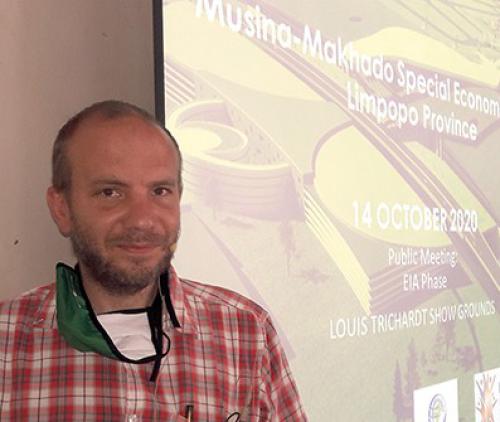 Mr Ronaldo Retief from Delta BEC, photographed during the public-participation meeting for the proposed Musina-Makhado SEZ that took place last Wednesday at the Makhado Show Grounds.

The proposed plan for the establishment of a special economic zone (SEZ) is continuing, with the next public-participation meeting being held at the Makhado Show Grounds in Louis Trichardt on 14 October.

The purpose of this meeting was specifically to provide more information regarding the proposed Musina-Makhado SEZ (MMSEZ) project to be located on an 8000ha piece of restituted land near Mopane. It also had the purpose of giving feedback regarding the findings of the draft environmental impact assessment (EIA) report, as well as providing the opportunity to seek clarity regarding the findings of the studies. The opportunity was created to record any additional comments, issues, and concerns.

Members of the audience were clearly there for different concerns and questions. One group is mainly concerned about the ongoing water issue, as well as the availability of other resources. Another group is in favour of the development, as they are eager to see job creation. Others are concerned about heritage – specifically about ancestral graves and other heritage objects.

Envisaged for the SEZ is that the energy and metallurgical complex (Heavy Industrial Area – Southern Site) will include, among others, a coal washery, a coking plant, heat-recovery power generation, a thermal plant, a ferrochrome plant, a ferromanganese and silicomanganese plant, a vanadium-titanium magnetite project, a stainless steel plant, a cement plant, a lime plant, a sewage-treatment plant, a light industrial processing zone and a machining zone. Provision is also made for a commercial residential area, a living area, and an administrative area.

Mr Retief, on behalf of Delta BEC, informed those present that, according to the studies done by them thus far, should this SEZ not be developed as envisaged, the economic growth of the region will not benefit from an extensive industrial and manufacturing cluster and the direct investment and job creation associated with the cluster. The region will also lose its opportunity to diversify its predominantly mining economy. No employment from the SEZ will be created and the region will continue to have a high level of poverty, unemployment, and underdevelopment.

Their view is that the non-development of the SEZ will also result in the current state of the environment’s largely remaining in its current condition and the surrounding land uses will remain undisturbed. Coking coal and other minerals of the region will then continue to be mined and exported for beneficiation in other regions or locations, with the associated environmental cost of transport, whereas it could contribute to employment creation. Furthermore, the environmental consequences of the beneficiation process will be transferred to such regions or locations.

In their opinion, the Musina-Makhado areas offer the best location and provide the largest economic benefits as opposed to other potential sites in Limpopo Province, such as Tubatse and Lephalale.

Section 24 of the Constitution states that “everyone has the right to an environment that is not harmful to their health or well-being and to have the environment protected, for the benefit of present and future generations...” Based on this, the EIA was undertaken to ensure that these principles are met through the inclusion of appropriate management and mitigation measures and monitoring requirements.

A biodiversity-offset strategy and implementation plan needs to be in place before site clearance of the proposed SEZ site can commence, and only if the Limpopo Department of Economic Environment and Tourism (LEDET) grants authorisation for this EIA. The measures will be undertaken to promote conservation through appropriate monitoring and management plans included in the environmental management programme (EMPr).

The findings of this EIA show that the benefits will potentially promote justifiable economic and social development but negatively impact upon the environment. The outcomes of this EIA aim to protect the ecologically sensitive areas and support sustainable development and the use of natural resources, whilst promoting justifiable socio-economic development in the towns nearest to the project site. However, should the development be granted authorisation by LEDET, the entire site will be negatively impacted upon, and a biodiversity-offset and implementation plan will have to be provided for offsetting environmental features.

To ensure the effective implementation of the mitigation and management actions, an EMPr has been compiled. The mitigation measures necessary to ensure that the project is planned, constructed, operated, and decommissioned in an environmentally responsible manner are listed in this EMPr - a dynamic document that should be updated regularly and provide clear and implementable measures for the establishment and operation of the proposed Musina-Makhado SEZ.

Questions and comments that were raised during the public meeting last Wednesday were, inter alia, the following:

Not all agree with pretty picture

Mr Wally Schultz, well-known local environmental activist and chairman of Save Our Limpopo Valley Environment (SOLVE) firstly raised concern about the advertisement of the public meeting. He asked where it had been advertised, upon which Mr Retief apologised that the notice was sent out the previous Friday whereas this was usually done two weeks in advance. They had apparently had no chance to publish this notice in the newspaper. Mr Schultz’s next question was very relevant, and this was: “Where is the water going to be sourced from?”

Mr Retief answered that water sources needed to be categorised for the short term, medium term, and long term. Out of 15 boreholes, five proved to have water, which is apparently ample for the construction period (short term).

A draft integrated-water-services report was also compiled during August 2020 and is available online. This report was compiled to be submitted as a part of the EIA report pertaining to the Southern Industrial Site and serves to describe the water requirements in terms of the SEZ’s envisaged development.

From this report one can see the water demand is substantial, compared to the current water usage in the region. The report stated that it will become clear that water demand can only be met by current local resources for minimal usage at commencement of the project. As the implementation progresses, the demand for further construction- and later process water will grow at an increasing rate, soon to be far beyond what can be met by any possible local supply. Tapping from resources further off, becomes incredibly complex.

A third question posed by Mr Schultz was regarding power generation, upon which Retief answered that the energy report accompanying the EIA was not a full specialist study. “This is a controversial issue at the moment,” Retief said. Under the Paris Agreement, South Africa has pledged that the country’s greenhouse-gas emissions will peak by 2025, plateau for another 10 years and then decline from 2036. Historically, electricity accounts for approximately 42% of national greenhouse-gas emissions. To achieve this target, the country will need to invest in lower or zero-emitting technologies, as the current coal-fired electricity-generation fleet reaches the end of its life.

Another question posed was on the topic of heritage. One speaker was concerned about ancestral connection to the sites (e.g. graves), as well as the baobab trees and where they were going to be moved to. The response was that moving the big trees might not be viable. The South African Heritage Resources Agency (SAHRA) will be involved in the issuing of permits, for example, to move graves. People in the audience also mentioned that the area was considered a sacred place. “The mopani, marula and baobab trees are woven into our culture.”

Despite it all, some just want jobs

Some members in the audience felt strongly about the creation of “decent jobs” and were strongly in favour of this development. The argument was offered that jobs would benefit the youth. Someone also mentioned that they wanted jobs but questioned whether this would happen at the expense of their own “being, food, climate, and water”.

Another person said that they were concerned about the contents of the draft EIA, as the document is in English and not in the four languages widely spoken in the area, namely Tshivenda, Isitsonga, Sepedi, and Afrikaans. Retief replied that all the documentation consisted of approximately 8 000 pages and that having it translated into all these languages would be a costly exercise. “All the languages should be brought to the table and not just English,” was the plea from the audience.

The overall recommendations in the report are the following:

Provided that the specified mitigation measures are applied effectively the EAP is of the opinion that an environmental assessment in terms of the 2014 EIA Regulations (as amended), promulgated under the NEMA, 1998, should only be considered by LEDET if:

• Alternative site(s), with significantly less environmental sensitivity that may be suitable for such a type of development in the bushveld, can[not] reasonably be identified and acquired.

• Sustainable and affordable water supply is secured and guaranteed for the proposed development.

• Condition of authorisation that an approved biodiversity-offset strategy and implementation plan be implemented.

• Alternative sources of bulk energy supply to the proposed SEZ site are further investigated and it be reasonably confirmed that no other sustainable and affordable energy supply solution exists. The mere fact that the site is located within the coal belt cannot be the main reason for developing another coal-fired power station as energy source for the SEZ development. Maximising renewable energy, as well as the use of other off-site sources of energy, must be considered as a condition for the development implementation.

• An avifauna assessment is also undertaken for the designated site to verify flight paths and raptors which may nest on the project site and be collected for relocation to a suitable new site as an integral part of the biodiversity-offset strategy.

* A condition of authorisation is that the specialist recommendations made in this EIA report and in the respective specialist studies, and as summarised in the EMPr, be strictly implemented and adhered to.

• As a condition of authorisation, site-specific EIAs, permits, and licences for bulk infrastructure services and specific investor industrial plants need to be undertaken and be authorised prior to development’s taking place.

• As a condition of authorisation, all bulk infrastructure and plant-specific EIAs and investors comply with best-management practices and sector-specific local and international laws and standards.

• An agreement is in place in terms of funding and managing the sustainable environmental end state of the proposed development.

The Draft EIA Report (with Draft EMPr) was available for review from 1 September 2020 to 22 October 2020. The public is invited to submit written comment to sez@deltabec.com .

The final EIA Report will be submitted to LEDET on 31 October 2020 for authority review and decision making.

Based on impressions garnered from the meeting, more specialist studies are required as many uncertainties still exist. One member of the public mentioned the following whilst talking about job creation: “The project must come here and change the lives of all of us – black and white. It will give hope to the generations to come.”