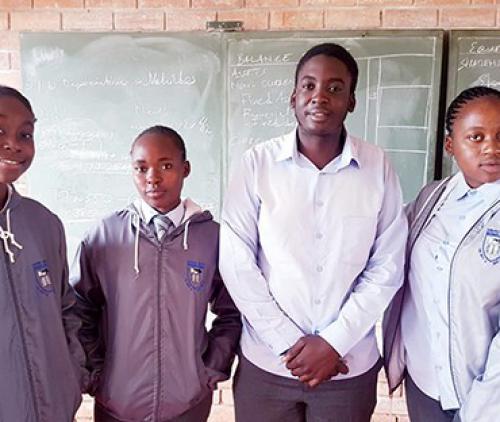 According to Angela Duckworth, a psychologist from the University of Pennsylvania in the US, grit is the key ingredient in personal success, and the learners from Shikundu High School in Limpopo proved the theory true as they scooped top honours in the JSE Investment Challenge’s Equity Portfolio.

The NC-Xikundu Team from Shikundu High School hails from Shikundu, a poorly resourced school situated in Malamulele, in the rural part of Limpopo. “Our school is severely under-resourced – buildings are old and derelict. However, our learners showed that they too have determination,” says teacher Clintone Maluleke, who mentored the learners during the challenge. “The sad situation in our community is a reflection of the state of the local rural economy. Most of the people in Shikundu completely depend on government grants for survival,” he explains.

However, Maluleke says the learners he supervises in the JSE Investment Challenge team are not letting their circumstances determine their destiny. “These first-time winners have demonstrated that grit is more important than their personal circumstances,” he says. Maluleke says the learners are also performing well in their academic studies – they are determined to overcome their current socio-economic conditions, and he is very proud of the learners’ achievement.

Maluleke says the teachers were so excited about the learners’ success that they rewarded them by allowing them to access Wi-Fi at the school, which is available to teachers only. All along, Maluleke was personally sponsoring the team’s data costs for Internet access, which they needed to participate in the JSE Investment Challenge.

These learners may live in underprivileged communities, but they are by no means lacking in ambition. Maluleke says some of the learners in the group want to become business owners, while others dream of becoming renowned, prize-winning economists after completing their studies.

Ralph Speirs, CSI Officer at the JSE, says the learners from Shikundu High School display the drive and determination emblematic of the "kind of learners this programme was designed for".

Speirs adds: “We want this programme to change people’s lives on several fronts; fundamentally, we would like to see more individuals becoming financially literate and independent. We also want it to serve as a doorway to a world of possibilities”.