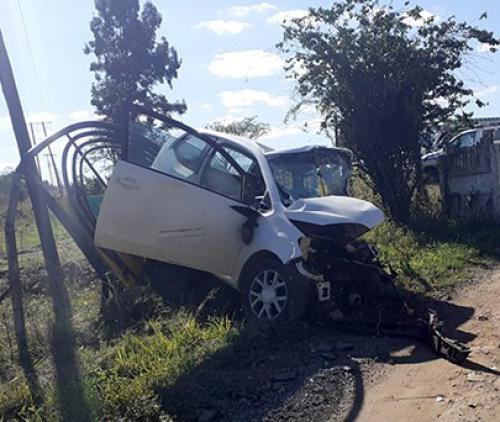 The sedan ended up on its side next to a fence after the collision.

Two people were killed and several passengers were injured in a head-on collision between a taxi and a sedan on the R524 between Louis Trichardt and Levubu on Tuesday afternoon. The road was closed for almost hour while emergency personnel, traffic officers, and police worked to clear the scene.

The driver of the taxi and one passenger died on the scene. They were trapped under the taxi. The injured passengers were taken to the Louis Trichardt Memorial Hospital for treatment.

According the police spokesperson, Brig Motlafela Mojapelo, the taxi was underway from Louis Trichardt when the accident occurred. Along the way, the taxi collided head-on with a sedan. The cause of the collision is being investigated, but unsafe overtaking is suspected. He confirmed that they have opened a culpable-homicide docket.

An eyewitness, Mr Jumara Muderi, said he heard a loud banging sound before the accident happened. "I was standing next to the road when I suddenly heard that sound. I realised that the sedan could overturn, as it was travelling at high speed,” he said.

Makhado Mayor Samuel Munyai expressed his condolences to the families. He said that the government was worried about the increasing number of accidents. “This is a serious concern as more innocent lives are lost on our roads,” he said.

The MEC for Transport and Community Safety, Mavhungu Lerule-Ramakhanya, expressed shock over the accident. “Our thoughts and prayers are with the families of the deceased during this time of grief, and we wish a speedy recovery to the injured ones. The department shares their heartache and is saddened that so many lives continue to be lost on South African roads, which not only impacts negatively on their families but on the province and the country in general,’’ said Ramakhanya.

The taxi overturned and ended up on the side of the road.