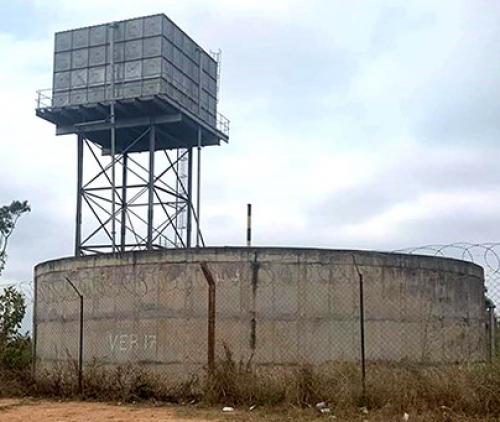 The reservoir that is not operating at Mulima.

Millions spent on projects, but still no water for Nthabalala and Mulima

Residents of two areas, Nthabalala and Mulima, are complaining about a R12 million water protect that is still not operational, in spite of having been “completed” several years ago.

The project falls under the auspices of the Vhembe District Municipality (VDM) and was intended to provide water to 10 villages in the Nthabalala and Mulima area. The villages include Masethe, Manyima, Ha-Maduwa, Pfanani and Lambani.

Residents of Pfananani village have resorted to interim measures to get water and are contributing R5 per household to maintain a borehole that was drilled in the village two decades ago. Community members say the VDM project was completed in 2014, but it does not supply them with water. After its completion, mud was found to be coming out of the borehole instead of water.

The municipality then constructed another project at Mulima at a cost of R25 million. Two boreholes were drilled, and two reservoirs constructed with the intention of connecting them to the mainline of the failed project at Nthabalala. The attempt to connect the two failed, because the water pipes laid in 2012 were already damaged.

“The project was supposed to be finished early in March last year,” said Mashau. He said that the contractor was not being paid and he eventually moved on to another project. “Many projects came here, but all is in vain and we don’t have water. There’s a water project, but there’s no development at these water projects,” he said.

Vhembe District Municipality’s spokesperson, Matodzi Ralushai, said that they had identified defects in the projects, but that their technical department would resolve them. He acknowledged that they were facing challenges with the provision of water to the affected communities. “We have identified the problems, which allows us to go to the community, where we have engagements this week,” he said.