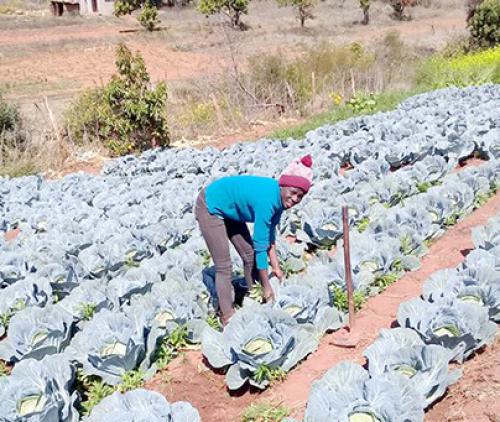 Riana Nengwekhulu has already established herself as a farmer.

At the age of 24, Riana Nengwekhulu has already established herself as a farmer whose products are sought by clients across the district.

A Bachelor of Education student at the University of South Africa and resident at Ha-Khakhu village, Riana farms with vegetables such as cabbages, mustard, sweet potatoes, and peanuts.

“As a young woman, I never pictured myself getting my hands dirty to feed the world, especially in an industry known to be dominated by men,” she said. “In the past years of my father’s owning a farm, farming had never crossed my mind, until last year when my dad gave me a portion where he had his peanuts planted that were ready to be harvested. I harvested 10 bags of 80kg.”

She then decided to try cabbages. Earlier this year, her brother joined her and her journey as a farmer started. “First experiences are known to be hard and tricky, but I would say mine was different. With every challenge we would face, like spraying the cabbages, my father was always a phone call away to give guidance and help,” she said. “This achievement of being able to produce healthy vegetables always keeps me moving and doing better.”

She stated that her target market was street vendors and nearby communities. “We have part-time helpers, and my plan is to employ more workers on a full-time basis to fight the unemployment rate in SA,” she said.

The challenge she is facing as an upcoming farmer is a lack of resources and financial help. “We can't employ more helpers as nature is unpredictable. It can favour you this season and not do so the next,” she said. “Agriculture influences the growth of the economy. My products play a huge part on combating the scarcity of food in the district and the country.”

She added: “Today I look at myself and thank God for letting me use my hands to feed his people. Everyone eats healthy food because of the work of my little hands. I am grateful.”

Riana believes that patience is a virtue and is needed when one is in the agricultural industry. “You sow and wait for harvesting time,” she said.

She has a clear message to the women of South Africa. “Rise up and work; farming is not a man’s job. This perception needs to stop!” she said.