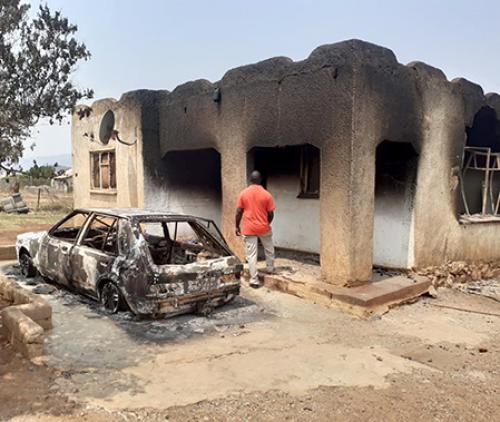 The five-room house and the car that went up in flames at Siloam.

A home in Siloam was burnt down last week when angry community members went there in search of a suspect in a murder case. The unfortunate homeowner lost most of his possessions, such as his car, furniture, and clothes, in the attack.

The incident occurred last Wednesday night. From what could be established, community members went in search of the person responsible for the death of Fhumulani Rambebu of Tshavhalovhedzi. They arrived at the house of Mr Erick Sithubi, believing that the suspect might be hiding there. When they could not find him, their anger was vented on the house and belongings.

A community member who did not wish to be named said that the mob went in search of the suspect, only to find that he was not at home. “People started smashing the windows of the house. Soon I saw smoke, and I knew that the house was on fire.”

He said that the people present kept on saying that they only wanted to arrest the suspect and hand him over to the police. “They got angry when they couldn't find the suspect,” he said.

Mr Erick Sithubi, the owner of the house, said that a cousin of theirs, who works in Gauteng, also lived there. Sithubi was terribly upset about the actions of the mob, saying they had no need to set his property alight. According to him, they knew that the house belonged to him and not to whomever they considered the suspect.

“We had lost everything in the fire, and by ‘everything’ I mean that I and other family members are only left with the clothes we are wearing,” he said. Sithubi said that everything inside the house was burnt to ashes. “Clothes, beds, blankets and a car, the stove, fridge and all the furniture were destroyed,” he said.

The fire also damaged the roof and the walls of the house. According to Sithubi, the damage to his property is estimated to be more than R600 000.

The spokesperson for the police in the province, Brig Motlafela Mojapelo, appealed to members of the community not to take the law into their own hands. He said that the police must be allowed to do their jobs without any interference from the community.

At the time of our going to press, no-one had been arrested in connection with the arson attack.