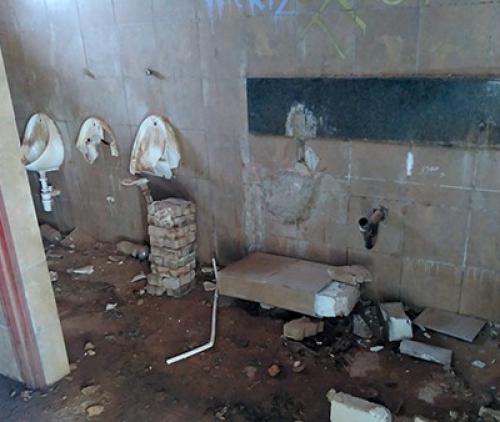 The toilets at the stadium can no longer be used. Everything is broken.

Please rename stadium, it is not in honour of my son

“I will be a happier mother and I will have peace of mind for the rest of my life if the municipality removes the name of my son as the name of the stadium. There is actually nothing good about the stadium,” said Gladys Manyathela, mother of the late soccer star, Lesley Phuti Manyathela.

The Manyathela stadium in Musina was named after the prolific striker who played for Orlando Pirates and the South African national team. At the peak of his career, in 2003, Manyathela was the Premier Soccer League’s top goal scorer. He died in an accident that same year.

Limpopo Mirror visited the Manyathela stadium at the end of August this year. We found that the goal posts are broken and most of the ground is covered with tall grass. Broken beer bottles are lying on the terraces. The ablution facilities are in a terrible state, with all the toilets seemingly broken. No maintenance programme appears to be in place.

After noticing around 2009 that the stadium was deteriorating, Gladys approached the municipality, but to no avail.

Wilson Dzebu, spokesperson for the Musina Municipality, said the challenges regarding the stadium were being attended to. He promised to comment on the call to remove the name when the time was right to do so.