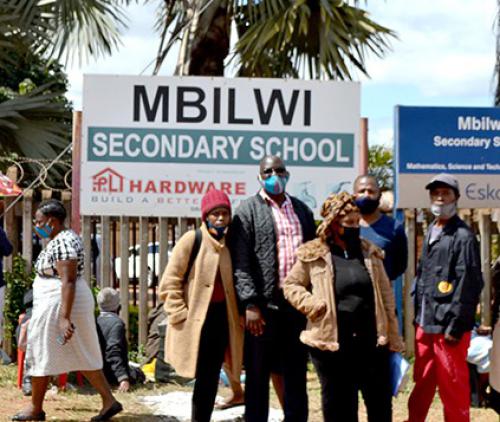 Some of the parents waiting in line at Mbilwi Secondary School, photographed on Monday.

The 2021 registrations for Grade 8 learners opened earlier this week, and at schools such as Mbilwi Secondary in Sibasa parents waited in long queues, hoping that their children would be admitted.

The queuing at Mbilwi started over the weekend, with some parents even opting to sleep in front of the gate to be first in line.

One of the parents who braved the chilly weather to wait in line at Mbilwi, Mr Jeremiah Murovhi, said that the queue started forming on Saturday morning at about 6:00. “As parents, we want our children to be admitted at Mbilwi, because of its reputation for producing astonishing matric results. There is also better discipline in this school, and we want our children to learn in a conducive environment,” said Murovhi.

Murovhi was worried that the school might limit the number of Grade 8s to 200 learners, because of a shortage of classrooms.

The spokesperson for the Limpopo Department of Education, Ms Tidimalo Chuene, said that the registration process was open from 1 to 23 September for children who will be going to a school for the first time or moving to a new school next year.

“All our schools have been identified as designated areas for collection and submission of admission forms. Parents and legal guardians of qualifying learners are therefore encouraged to immediately collect registration forms from the school nearest to their home, where other siblings are attending or within a feeder zone,” said Chuene.

Chuene appealed to principals to accommodate learners in line with the carrying capacity of their schools. She said the appeal was made in line with the department’s efforts in trying to curb overcrowding.

Chuene added that the department would monitor the learner-admission process very closely to ensure that the rights of learners are always protected.