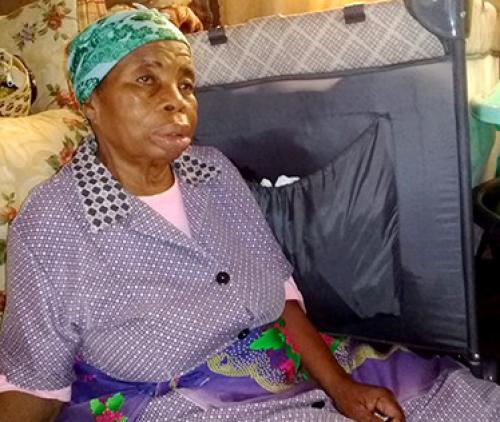 Ms Kwinda Netshilema (73), who was attacked and wounded while collecting wood. Photo supplied.

Defenceless elderly women are being attacked by unknown assailants while gathering wood in rural villages near Thohoyandou. In the latest incident, a 73-year-old woman was stabbed while collecting wood in the veld near Lwamondo-Hagelebe.

On Friday, Ms Kwinda Netshilema became the latest victim of thugs. Her daughter, Ms Ndivhudza Netshilema, said that she had gone out into the veld at about 09:00 to collect wood she had chopped the previous day. She was attacked by unknown assailants who stabbed her. She sustained serious injuries to her left hand.

“My mother was not having a panga, a cell phone, a knife or any money on her when the incident happened, as she was only out to collect wood,” said the daughter. The granny was taken to Tshilidzini Hospital where she is in a stable condition.

Netshilema added that it looked like the work of a gang that pounces on defenceless old people. She recalled three other incidents where women were attacked in the veld near the village while collecting wood.

The chairperson of Munna Ndi Nnyi? (Who is the real man), Dr Bardwell Mufunwaini, strongly condemned such action, which is believed to be done by young men in the villages who attack and rob old people, mostly women. Mufunwaini called on the government to develop a policy that will force young people lingering around during the night to explain what they are doing.

Limpopo police spokesperson Brigadier Motlafela Mojapelo said they were aware of the cases reported and the police were trying to apprehend the culprits.