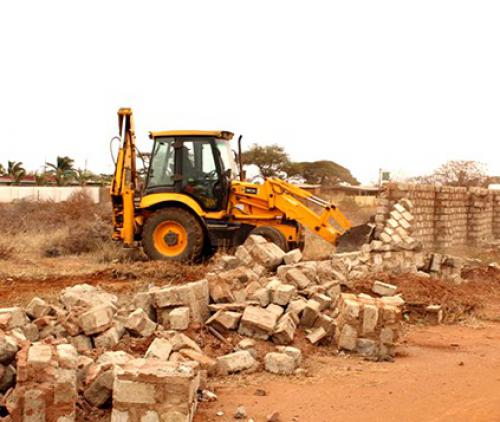 One of the walls is being demoslihed.

Dispute over Madombidzha stand gets ugly

A dispute about a piece of land in Madombidzha is turning ugly, and apart from the fighting in court, the matter has also escalated into physical violence.

Earlier this month, one of the parties allegedly partly demolished structures built on “his” property. He also locked out the people who occupied the stand. The other “owner” then rushed to the court, asking it to intervene and stop the intimidation. This decade-long feud now seems to have reached boiling point.

On the one side is Mr Ndwakhulu Samuel Mashamba, who describes himself as a businessman from Louis Trichardt. In court documents he states that he was formally granted permission to occupy stand number 435 in Madombidzha in August 2013. Prior to that date, he had already occupied the stand, with the permission of the late headman, Mpfuni Ramabulana.

Mashamba states that the conflict started in January 2014 when Mashudu Nemrod Munonde tried to take over the stand. He then went to court to obtain an interdict to stop Munonde from occupying the stand. The matter went to the High Court and is apparently still pending.

According to Mashamba, things were quiet for several years, until 7 August this year, when he received a phone call from his employee who resides on the property. He was told that a group of people had arrived at the site and had started demolishing structures. Upon arrival at the site, he noticed the destruction, but he was prohibited from entering the premises.

Mashamba tried to obtain a court interdict on Monday, 10 August, to stop the interference. “My family, employees and I have not been able to return to our property after being forcefully and unlawfully removed,” Mashamba states in court documents. He estimates the value of the damage at about R600 000.

The interdict, which Mashamba tried to obtain on an ex parte basis (only one party is present), seemingly did not serve before court and, from what could be established, will only be heard on 25 August.

Earlier this week, Mashamba was still fuming and said Munonde had no need to try and demolish the structures. He maintained that he had legally obtained the stand, which he was using for his business. “It was really sad to see that (the demolishing) happening. I closed my eyes, put my hands on my head because I was convinced that they were going to (completely) demolish my building,” he told Limpopo Mirror.

The defendant in this matter is also a Louis Trichardt resident, Mashudu Nemrod Munonde. He claims that he bought the stand in 2012 from Mr Simon Matamela, the younger brother of the late owner, Mr Brown Matamela. He said that he had paid R16 000 for the stand.

Munonde accuses Mashamba of illegally occupying the stand during all this time. “I am the rightful owner and this stand belongs to me. So, I cannot just keep quiet when Mashamba takes my stand without permission. I warned him not to start building until these issues are sorted,” he said.

He referred Limpopo Mirror to the tribal authority that controls the land to confirm whom the site belongs to.

When contacted about the dispute, the chairperson of the Sinthumule Tribal Council, Mr Makhado Sinthumule, said that Munonde was the rightful owner of the stand. He said Munonde had followed the correct procedures when buying the stand.

“The stand belongs to Munonde and we will never stop developing it because of selfish people who want to block the development of our area,” said Sinthumule. He said the Tribal Council was not aware of the sale of the stand to Mashamba and this transaction had not been registered at the tribal council’s office. “We are not aware of the sale. We have launched an investigation into how the stand was sold,” he said, adding that the tribal council did not recognize Mashamba as the rightful owner.