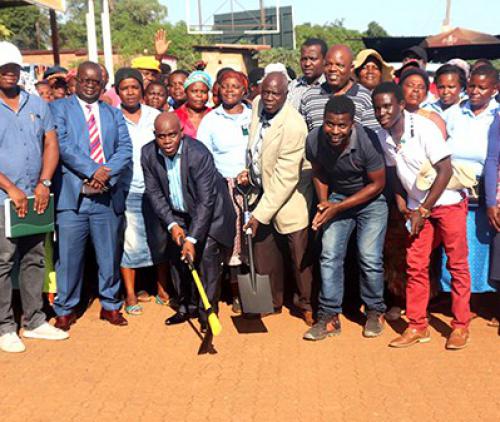 Cllr Samuel Munyai (with the shovel) surrounded by members of the local community and vendors during the launch of the project in March this year. Photo: Kaizer Nengovhela.

SANCO Tshakhuma aggrieved by being ignored in market project

The Tshakhuma branch of the SA National Civic Organisation (SANCO) has expressed its frustration at not being included in any of the planning or monitoring of the multi-million-rand upgrading of the Tshakhuma fruit market.

The secretary of the SANCO branch, Mr MJ Mulaudzi, complained that they were being side-lined and were not even invited to the function on 11 March this year when the site was officially handed over. A lot of confusion also exists about what is happening with the project and how much money has already been spent. “We are afraid that the community will be given a valueless project, while a lot of money was injected,” said Mulaudzi.

In 2016, the popular market next to the R524, en route to Thohoyandou, was upgraded. The Department of Small Business Development then allocated R4,8 million to rebuild the structures.

The Makhado Municipality added to this in 2018 by making R2,4 million available for infrastructure development at the market. In the municipality’s annual report for that year, they state that the project is done in partnership with the national Department of Small Business Development. The completion date was set for July 2019, but this was seemingly not met because Eskom powerlines first had to be relocated. This report states that R1,04 million has been spent on the project.

This appeared to be phase 1 of the project, and according to SANCO, not much was delivered. “During phase 1, only an ablution block and a kitchen were built,” said Mulaudzi.

In the latest Integrated Development Plan (IDP) of the Makhado Municipality, a further R5 million is reportedly allocated for this project. In March this year, the mayor of Makhado, Cllr Samuel Munyai, officially opened the “R8 million” project to upgrade the stalls.

At the launch of the project, Munyai said the upgrade would entail building a modern structure of stalls, as well as flushing toilets. The area will be equipped with a borehole with two tanks and the area will be paved. He said that they were going to demolish the old stalls next to the road.

Mayor Munyai made another reference to the Tshakhuma market during his budget speech in June this year. He then announced that the market was to receive R15 million.

SANCO’s secretary, Mulaudzi, said that the secrecy surrounding the project made judging the progress that has been made difficult for them. The SANCO branch also felt that they had been deliberately excluded. Even the local Business Forum did not form part of the steering committee. “The steering committee is composed only of the Tshakhuma market committee, the ward councillor and the territorial council,” he said.

One of the worrying aspects for SANCO is that the project is supposed to create jobs for people from all the nearby areas. Mulaudzi explained that the Tshakhuma area comprised 15 sub-villages, but most of those had been excluded.  Ten of the 18 appointed workers came from Luvhalani village.

The design and layout of the new structures are also being questioned by SANCO. According to Mulaudzi, the market complex was initially supposed to be on both sides of the road, but now it appears to be only on one side. SANCO also feels that not enough provision has been made for ablution facilities.

Mulaudzi said that they had requested to be part of the steering committee on 13 May, but they then decided to withdraw after realising that they were still being ignored and not being invited to several meetings.

Questions were sent to the Makhado Municipality’s spokesperson, Mr Louis Bobodi, earlier this week. He responded on Tuesday, saying that he was still waiting for feedback. At the time of our going to press, no response had been received.