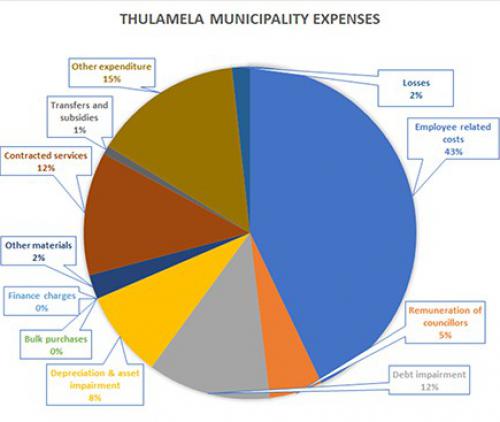 The breakdown showing how Thulamela Municipality's expenses are spread.

Last month, the Thulamela Municipality tabled its budget, which exceeded R900 million for the first time. This municipality is one of the best-performing municipalities in Limpopo and it received an unqualified audit from the auditor-general (AG). At the same time, however, this municipality is also one of the most “expensive” to maintain, with almost half of its operational income being used to pay salaries.

In a province where the bar for municipalities is not extremely high, Thulamela performed well. It did not get a clean audit last year, but the AG did not appear too worried about the state of affairs in this Vhembe-based municipality. The municipality has a healthy bank balance and is also one of the few that were not “scarred” by the VBS Mutual Bank scandal, since they did not invest any money in the VBS scam.

One of Thulamela’s biggest challenges is to curb the steep rise in its salary bill, which topped R285 million in the previous financial year. When the almost R35,2 million is added to pay councillors, the picture gets worse. These two expenses represent 47,6% of the municipality’s operating expenditure. If the R94,6 million that was spent on “contracted services” gets added, the figure goes to a staggering 60,49%.

The picture looked a lot better a few years ago. In 2016, the salary bill represented 30,11% of the expenses. No outside contractors were used to get work done, which effectively meant that, of the taxpayers’ money collected, 30 cents in every rand were used to pay staff and 70 cents went to expenses such as infrastructure projects and maintenance.

The staff costs continued to escalate the past five years, and in the 2020/21 year, R306,89 million is allocated in the draft budget to cover this expense. The councillors will cost the taxpayers R36,96 million. Council implemented a 6,25% increase for municipal officials, while councillors opted for a 4% increase.

A new elite has emerged

Finding out exactly how many people work at the Thulamela Municipality is not such an easy task. The latest available Integrated Development Plan (IDP) states that 502 positions were filled in presumably the 2018/19 financial year. Council’s annual report for the same year gives the total as 541. The draft budget, however, refers to 590 permanent employees and 93 contract employees.

Even if the higher number of staff members (590 + 93) is used to calculate the average cost per employee, the amount is mind-boggling. The expected average salary of a municipal employee at Thulamela Municipality is R449 326 per year, or R37 443 per month.

The situation seems to be of concern to the powers that be in the municipality, but not much can be done. In the 2018/19 annual report, the municipal manager, HE Maluleke, complains about this, saying that the “employee cost norm should range between 25% and 40%.” He points out that the current rate is 47%, which includes the councillor allowances. The ratio exceeds the norm, he states, blaming it on “inefficiencies, overstaffing or even the incorrect focus due to misdirected expenditure to non-essentials or non-service-delivery-related expenditure. The budget for 2019 /2020 will reduce the norms gradually,” he says.

In Thulamela’s IDP, the issue receives attention once again:

“Due to the relative high personnel expenditure and the tendency of this budget item to increase with a higher percentage than the annual limit set by National Treasury, it is of the utmost importance to find ways and mean(s) of decreasing expenditure and increasing cost-effectiveness.”

Can you eat your big slice of cake and still have it?

The 81 councillors will, on average, collect R38 024 per month. The mayor is the most expensive “item”, costing taxpayers R1,42 million per year. The Speaker collects R1,1 million per year.

Thulamela also employs some of the most expensive senior managers in the province and the top six collectively take home R9,11 million. The municipal manager is the top earner, with an annual salary of just below R2 million. The lowest-paid senior manager collects R1,12 million per year.

Sustaining this huge operating expense might become difficult for this municipality, however. According to the IDP, the municipality receives 61% of its revenue from intergovernmental grants and the remainder must be generated from internal sources. In the latest budget speech, Mayor AS Tshifhango states that R602,8 million will come from grants in the 2020/21 financial year, while R301,9 million will have to be raised internally. “The optional utilization of all its sources of revenue is thus of the utmost importance in order to ensure the remainder of sustainable services to the residents of the municipality,” the IDP document states.

Judging by the statistics provided in the IDP, collection of revenue in Thulamela is a huge challenge. The municipality battles to control its debtors. “The current Council payment level is 18%. This figure excludes the consideration of the newly demarcated area. It would be ideal that the payment level be increased to 30-40% by 2021 June,” states the plan.

In his budget speech, the mayor also highlights the problems with doubtful debt. In the previous financial year, the council budgeted for R110,64 million in doubtful debts. This in effect means that the council is billing thousands of consumers, but it already assumes that the money will not be paid. In the new financial year, this figure is adapted downward to R79,42 million. “This was caused by plans to implement a revenue enhancement strategy which will reduce the total debt this coming year,” said Mayor Tshifhango.

Revenue from other resources, such as traffic fines, also seems to be minimal. In the IDP, only 0,78% of all traffic fines are reportedly being paid. “A thorough investigation has been undertaken in order to identify the reason for the current state of affairs and recommendations have been made pertaining to correctional strategies to be implemented in order to ensure the services become self-supporting,” the IDP states.