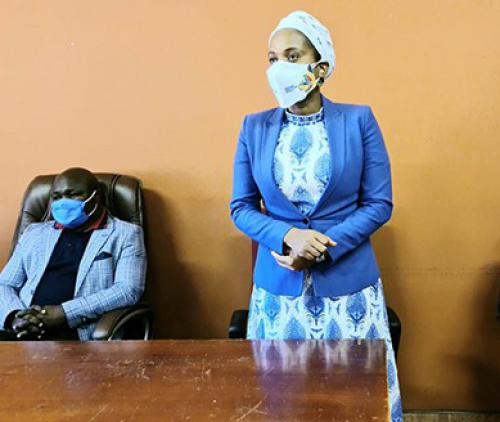 Traditional leaders must assist in fight against virus

The MEC for Health, Dr Phophi Ramathuba, together the executive mayor of Vhembe, Cllr Dowelani Nenguda, and Makhado Mayor Samuel Munyai, visited traditional leaders to give advice on Covid-19.

Ramathuba said visiting the two traditional councils was important for her and the mayors, so that they could spread the message of the importance of following the lockdown rules to help prevent the spread of the virus.

Although Vhembe was still lagging behind all the other districts in the province in terms of infections recorded so far, Ramathuba said meeting traditional leaders was important, so that they could be educated about the importance of keeping social distancing, sticking to the lockdown rules during funerals, wearing masks, staying at home, and washing hands with soap regularly.

“When this virus started in China we thought it was something foreign. Then the first case was recorded in South Africa when a male person was confirmed to be positive with this virus in KwaZulu-Natal. But some of us we still thought it was not our problem as it was in KZN.

“Then another case was recorded in Johannesburg on March 16, but some of our people still thought it was not their concern as it was in Gauteng. Today, we have several cases of this virus in our province, including here in Vhembe. The reason why we came here today is that we wanted to make this community aware that this virus can strike one of you here and spread rapidly.

“We are urging every one of the community members to treat each other as if we are positive with this virus. We also appeal to our traditional leaders to make sure that Covid-19 regulations are followed, especially during funerals where only 50 or fewer people are allowed,” said Ramathuba.

She urged the community to go back to their roots, where people greet each by bowing down without shaking hands. She also discouraged the community from stigmatising those who have tested positive for Covid-19.

To children, Ramathuba said Covid-19 was like chicken pox as it did not affect them that much. However, she said the virus was deadly, like missiles, to elderly people.

Meanwhile, Nenguda said he was happy that the community of Muila and Ha-Mulima were adhering to the lockdown rules as beer halls and soccer fields were empty.

Thovhele Vho-Fhatuwani Mulima said they were keeping record of all people who attended funerals for tracking purposes, in case of a recorded case of the virus afterwards.

The MEC,  the two mayors and their entourage proceeded to Levubu Clinic to monitor its compliance.