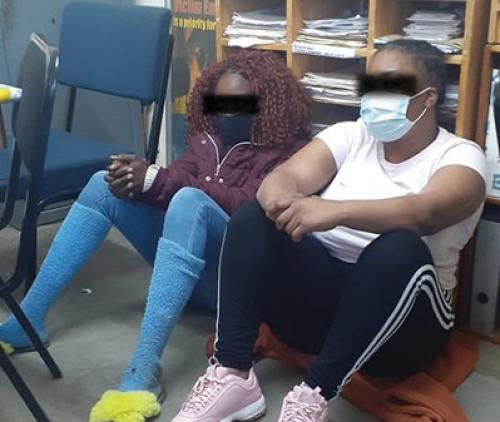 The young mother from Ha-Rabali in the Nzhelele area was arrested alongside her lady friend who apparently took the video of the incident.

The video of a young mother encouraging her two-year-old boy to smoke a joint with her caused an outcry on social media the past week. The woman, from Ha-Rabali in the Nzhelele area, was arrested alongside her lady friend who apparently took the video of the incident.

The video started circulating on social media over the weekend. It shows the 21-year-old mother smoking what appears to be marijuana. She then hands her toddler the joint and he is encouraged to take a puff. While pulling him closer, the mother blows the smoke over the child’s face.

A second video that also did the rounds shows the boy carrying a bottle of Savannah cider. The boy takes a sip of the alcohol before being handed a full bottle. The full bottle is then taken from him and he is encouraged to first finish up the remainder of the Savannah.

When the video came into the hands of law enforcers, they were quick to respond and the mother and her 19-year-old accomplice were arrested on Saturday. They appeared in the Dzanani Magistrate’s Court on Monday, facing charges of child abuse. They were both denied bail, and their case was postponed until Thursday (23 July) for a formal bail application and further police investigations.

The toddler was taken by child protection services and was handed to his grandmother, who will apparently look after him while the investigations continue.

Ms Rinae Sengani, a gender activist from the Rinae Sengani Foundation, said she was happy that the bail hearing of the two women had been postponed. She said the victim should be taken for a medical examination.

“As a foundation, we wish to express our appreciation to the criminal justice system for placing the best interests of the child before those of the accused persons. We further wish to reiterate our support to the child victim and that we will take the status of 'friend of the court' in this case. We hope that the justice system will not fail this innocent child in this case,” she said. “This should set an example to other mothers who are doing this (feeding their children alcohol or marijuana) and have not been caught yet.”

The MEC for Social Development, Ms Nkakareng Rakgoale, said that she was appalled and flabbergasted by the incident. "It is worrying to see an adult encouraging a child to consume alcohol and smoke drugs. What baffles me the most is that this happens at a time when the government is trying hard to get rid of an alcohol-dependent society. Alcohol and substance abuse have proved to be a contributory factor to social ills we are today confronted with in various communities in the province and the country at large. Also considering the adverse effect alcohol has on the growth and development of a child, this is simply unacceptable,” she said.