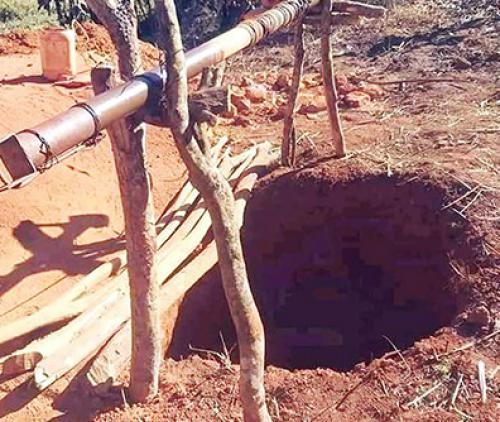 Mulovhedzi opts to dig his own well

During this time when the nation is grappling with the ripple effects of the Covid-19 outbreak, such as price hikes and job losses, one man decided that he would use a pick and shovel to dig a well to quench his thirst.

Vho-Vhonani Mulovhedzi, a resident at Muguru section of Mukumbani village, said that he had been suffering because of the lack of water in the area and, as a result, he had decided to come up with the plan of digging a well.

“I am a hard worker by nature, and the lack of money to hire a drilling machine to drill a borehole for me caused me to put my spirit of working hard into practice,” he said. “When I started out, some people encouraged me while others laughed at me and my work.”

Most parts of the area have had no water for some time, and with lockdown in place, no water was available in public communal taps at all. “We were on Level 5 and 4 of the lockdown and things were bad as we had no water. Then I decided then that it was now or never; as a result, I started digging for water,” he said.

A husband and father of three children, Mulovhedzi said that he had found water at 11 metres and gone deeper for an additional three metres, leaving his well 14 metres deep. “I managed to get to water at 11 metres on my fifth day,” he said.

He said that this was his first effort at digging the ground for water, and he would like his neighbours to benefit from the borehole too, at no actual cost. “My plan is to install a water pump and three 2 500 litre tanks, so that all people can easily access water in our section,” he said. “But I am penniless, which means that I cannot afford to install the water pump with three tanks as per my plan.”