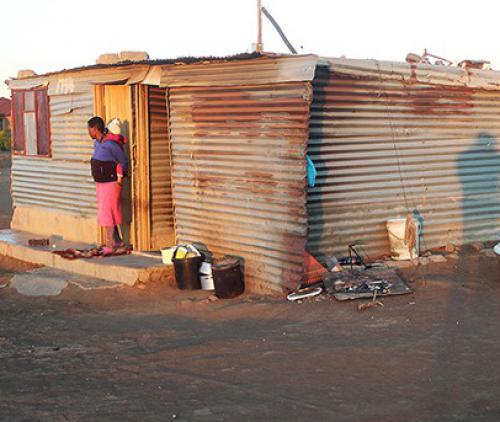 The shack in which nine family members live.

Why can't we also get a new home?

A family of nine members at Tshiozwi continues to live in an unstable shack, even after many attempts to have the government build them an RDP house.

The shack has no proper floor.

Ms Portia Makgoto said that she failed to understand why all services should bypass them in the village. The corrugated sheet shack is so tiny that squeezing all the members of the family in is almost impossible. “It is hard to share a shack with other eight people because the room is too small,” she said.

“Even when we submit our names for the hunger relief programme, they do not give us food,” she added. “But we see even people who are employed getting food, while our name had been removed from the list. Maybe we have wronged those who compile the name list and now they are taking revenge by rubbing off our name each time we need help.”

Makgoto said that the municipality should provide them with a temporary shelter while they were still considering whether to build them a house.

The shack at the rafters is flimsy, so that one can see the sun and the sky from inside the shack. During rainy seasons, the hut is filled with water that enters through the roof. At one stage, the water damaged the main electricity box and it had to be replaced. “Now we fear that if the rains come again and find us still living in this shack, the electricity box may burst and kill all of us in the fire.”

Chief Vho-Vhathundimapfura Sinthumule appealed to the community and businesspeople to assist people living in poverty and to uplift the community. Those who want to help with any assistance can call 072 050 2693.