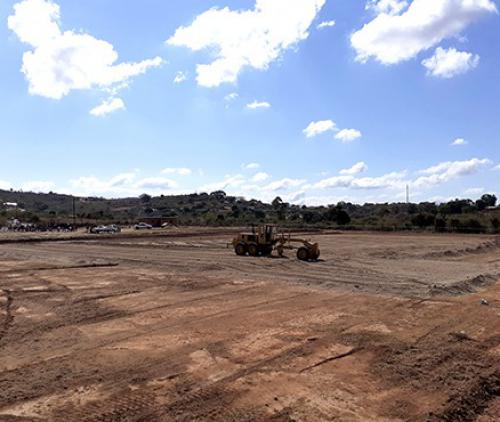 A grader clears the sport field.

Ululations and whistles erupted when the director of the Hangwani Mulaudzi Foundation, Brigadier Hangwani Mulaudzi, distributed food parcels, masks, and sanitisers to 150 households of Mukondeni village in the Mashamba area.

The parcels were handed over during an event on 24 June, held at the Tshikhuthula Grounds, that formed part of the foundation’s Covid-19 relief effort. The main event of the day was, however, to monitor the sports-field project that the foundation had embarked on.

The locals hailed Mulaudzi as a hero who had brought relief and development to the area. Vho-Violet Mukhola said that they had received food parcels in the past, but they were not as much and valuable as the ones from the foundation. “Covid-19 has hit us hard in the pocket, and now we really thank this Good Samaritan who has been this kind to us,” Mukhola said.

The Hangwani Mulaudzi Foundation received R3 million in funding from the National Lotteries Commission (NLC) in July last year to build a sports centre. The first step was to engage the locals at Mashamba village and obtain land where such a sport field could be established. This process was concluded in September and the project could commence. Since then, the project has dragged on and construction was severely affected by the Covid-19 lockdown period.

During the paper’s visit on June 24, the workers were busy with the finishing touches on the newly erected barbed-wire fence around the field. A grader was busy levelling the pitch, while an unequipped borehole had already been sunk. Electricians were busy wiring the one-block ablution facility that comprises seven toilets.

“This is a rural area and carrying out a project in an area like this is quite expensive,” Mulaudzi said. “So far, it seems we have under-calculated the project cost, because we are now using monies from our own pockets to complete it, and that might come to anything between R300 000 and R500 000,” he said. “Even the food parcels, sanitisers, and masks that we are handing out today are all from our own pockets because we are now left with nothing from the fund.”

He said that the sport centre, which would comprise a block of toilets, an office and a change room facility, a borehole with running taps, and fencing, would be handed to the community in three months’ time. “We are in a serious value-adding project here,” he said.

Cllr Enoch Sithi (Ward 12), who is the local overseer working closely with the foundation, said that he had been involved with the project from its introduction to the village sometime late last year. “I am an overseer of this project and I am satisfied with how it is faring so far. The foundation and I had made sure that only local businesses and individuals were employed to render services on this project. Again, as the community, we are in the long run surely going to benefit from the sport centre as those who do not have jobs would come to conduct snack and food stalls during sporting events at the sport centre.”