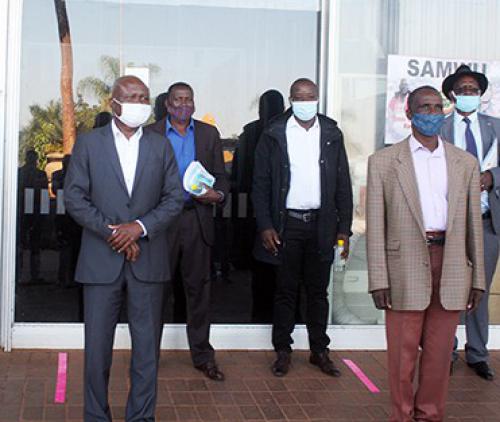 The executive mayor of the Vhembe District, Cllr Dowelani Nenguda (in the middle), photographed with some senior traditional leaders after the meeting in Thohoyandou.

Traditional leaders need to be consulted on development projects

Some of the senior leaders who are also members of the Vhembe House of Traditional Leaders and who met the executive mayor of Vhembe District Municipality (VDM), Cllr Dowelani Nenguda, raised concerns that they are not consulted on matters that involve them and their communities.

The VDM met with some traditional leaders on Monday in the council chamber as part of strengthening relationships and informing them about the work of the district command council and the Integrated Development Plan (IDP) ahead of the new financial year of the municipality, which will start at the beginning of July.

The meeting took some time to realise, since the district municipality and senior traditional leaders could not meet because of the Covid-19 pandemic.

Thovhele Vudzidzhena Nethengwe told the gathering that traditional leaders seemed to have been left out of the information and awareness campaign regarding the Covid-19 pandemic, because he never saw any councillor visiting his tribal council and informing the communities.

Nenguda applauded the senior traditional leaders who attended the meeting, saying they were ready work with traditional leaders. According to him, some of the programmes meant to engage with them were blocked because of the spread of the coronavirus.

He added, however, that as water services authority they were very worried about illegal water connections, which would leave many parts of the district without clean water.