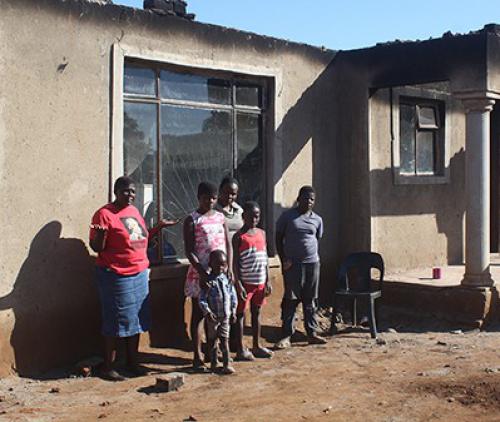 Ms Julia Ndou, photographed with her children and grandchildren next to the house that caught fire.

An unemployed single mother of three children and two grandchildren was left with nothing when her six-room house caught fire, leaving her and family to stay with relatives.

Ms Julia Nnditsheni Ndou (45) of Ha-Magilasi village in the Vuwani policing area said life was a nightmare as she and her family were without a place stay and sleep. The house that caught fire last Tuesday was partly burnt down, but the roof of the house was totally destroyed.

According to Ndou, she was alone when she discovered that her bedroom was on fire. She cannot explain the origin of the fire and what had caused it, and said she was devastated about the situation.

“I then shouted to call the community, who came in large numbers to help, but our taps were without water. Some of the community members had to take water in buckets from their homes to help fight the fire,” said Ndou. She said the Vhembe Fire Fighters situated in Vuwani arrived to help, but unfortunately, the fire had already destroyed everything inside.

Ndou is also worried because her clothes and those of her children were destroyed and they were left with only the clothes they were wearing that day.

The manager of the Vhembe Youth Empowerment Programme, Ms Susan Ravuku, which based in Ha-Mangilasi in Vuwani, said after they had heard about the incident, they had interacted with different structures. Some helped the family with clothes and household utensils and community members volunteered to repair the roofing.

“We are also worried that the family has schoolchildren who lost uniforms and schools are to re-open very soon, meaning learners will need school uniforms,” said Ravuku.