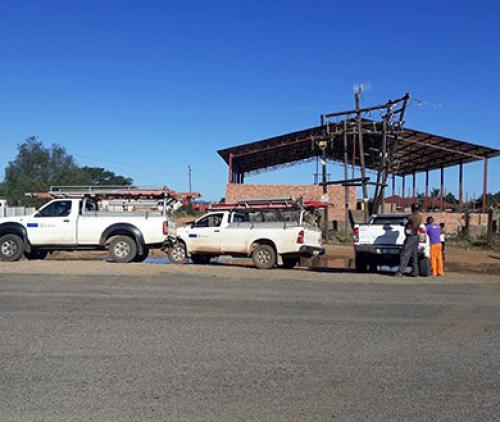 Eskom technicians are busy working at the substation near Madombidzha.

Residents from villages in the Sinthumule and Kutama area have been left without electricity since Tuesday, after a substation exploded. Exactly when the power supply to the areas will be restored remains uncertain.

The Flurian substation apparently went up in flames on Tuesday. Since then, thousands of families staying in the affected villages have been left without electricity.

On Thursday, several of the businesses and residents were getting desperate. Fridges and freezers were not working, and many people complained that food was going bad. Residents also complained that calls to Eskom were in vain, as no clarity could be provided about what was happening and for how long it would last.

Ms Rudzani Ligaraba of Madombidzha said she had been without electricity for three days and this was starting to affect her health. “I started using a paraffin stove to cook for my family, but the paraffin stove isn’t safe for the kids,” she said. Ligaraba said that she had contacted Eskom several times, but nothing had happened.

Ligaraba was also really concerned about the effects that the outage has on poorer families in the area. “Some of the families have not eaten a proper meal in three days,” she said. She appealed to the government to intervene.

The chairperson of the Zoutpansberg Community Development Forum, Mr Patrick Sikhutshi, said that the community was experiencing tremendous losses as a result of the electricity outage. He said that Eskom should be held liable for all the losses incurred. Sikhutshi also said that the learners who made use of online classes could no longer continue with their studies.

Sikhutshi appealed to Eskom and the Makhado Municipality to do everything in their power to resolve the problem.

Mr Shadrack Munyangane of Eskom told Limpopo Mirror that a team of technical experts was on site to establish the nature and extent of the damage. He said that they had found that a transformer at the Flurian substation had overloaded and exploded. He assured residents that the electricity supply would be restored but could give no indication as to when this would happen.

He said that Eskom was committed to helping the people but, unfortunately, things did not always go as planned. He apologised to the community for the delay and inconvenience.