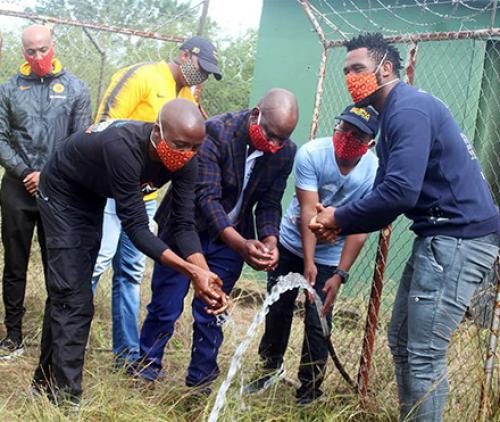 Water to a disadvantaged community ... From left to right in our photograph are Mr Richardt Mabaso from the Siya Kolisi Foundation, Chief Livhuwani Matsila, Mr Sello Hatana, CEO of the Nelson Mandela Foundation, and Springbok captain Siya Kolisi, photographed at the borehole.

Several families will not have to worry about what they will eat during the lockdown. The Siya Kolisi Foundation, in conjunction with Imbumbi, the Nelson Mandela Foundation and the Radzambo Cultural Foundation, has donated groceries that will last them for a month to more than 500 needy villagers around Vhembe.

The Springbok captain, Siya Kolisi, said giving back to the people who supported him was important. He said they were working with the chiefs, different structures and municipalities who were affected by the national lockdown. He urged people to come on board and donate if they could.

"This is a difficult time for many people, and we want to make sure that as many families as possible are equipped."

Chief Livhuwani Matsila of Radzambo Cultural Foundation said that during the lockdown most of the people were not working.

In a separate event, the community of Matsila village was joyful when residents received water after spending five years without a drop of water. The borehole that was equipped for the community many years ago was vandalized by thieves.

Chief Livhuwani Matsila handed over the borehole to the thirsty community on Monday. The frustrated community of Matsila approached Chief Matsila for assistance, claiming that the government could not give them services. The event was witnessed by a few people, who were complying with the COVID-19 rules and regulations.

Matsila said that he had assisted the community with the pump system and installation. He said that after the community had approached him about the shortage of water, he agreed. “I am always available to the community and am urging businesspeople to take the giant step of ploughing back into the community to bring development and real change in our area,” he said.

A community member, Mr Talulanyani Mushavhela, said that the community was relieved after five years of struggling without water. “This is to ensure that the community has access to clean water, a key ingredient in the fight against the spread of the coronavirus. For years now members of the community were forced to pay R5 per 20-litre container to people with boreholes. Today we are very thankful to Chief Matsila.”