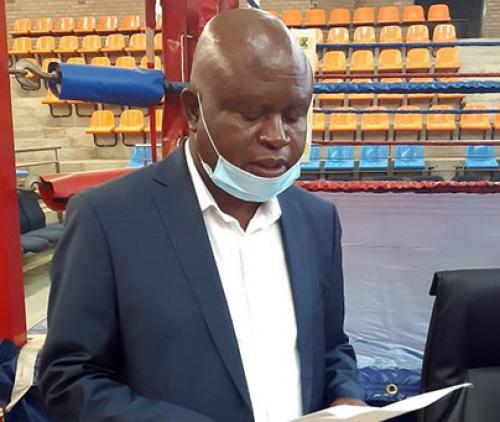 The executive mayor of Vhembe District, Cllr Dowelani Nenguda, delivers a speech during the launch of the Vhembe Food Bank.

The executive mayor of the Vhembe District Municipality, Cllr Dowelani Nenguda, said they would fight hard against people found to be stealing food parcels meant for poor and vulnerable community members.

"We shall protect our poor and vulnerable community members from unscrupulous people stealing food parcels meant for easing the plight of our people during this difficult time of lockdown. We have heard of the many allegations that some people were stealing food parcels meant for the poor and vulnerable,” said Nenguda. They will work with the Department of Social Development and SASSA in the distribution of food parcels as soon as they are registered at the centre.

Nenguda, who was joined by local mayors, was speaking on Friday at the Malamulele Gymnasium during the launch of the Vhembe Food Bank, the place that was erected to help coordinate the distribution of food parcels from one centralized place.

According to Nenguda, the food bank will be situated in the Vhembe District Municipality’s disaster centre in Muledane near Thohoyandou. He said the reason for launching the food bank was to be able to manage the food parcels meant to benefit poor and needy people in one centralized place.

“It will be well structured, handled in a dignified way and some health inspectors will have to check whether they are good, before their expiry date. We urge people to continue donating food parcels, but they must come to the disaster centre and not just any place,” he added.

He said that they would prevent some people from donating fake items and expired foods, which would be hazardous to people’s health.

Host mayor Moses Maluleke of Collins Chabane Local Municipality in Malamulele said they fully supported the initiative of launching a centralised food bank as many allegations of corruption had been reported.