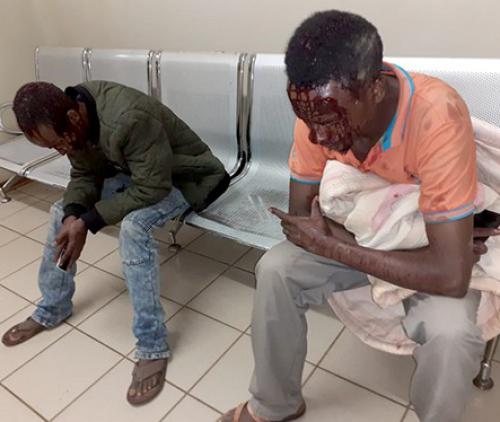 The lockdown period seems to be no deterrent for some criminals, with burglaries and robberies continuing in areas such as Madombidzha. On Sunday night, two Ethiopian citizens were attacked and robbed inside their spaza shop.

According to Mr Daniele Etoso, the incident happened at about 02:00 when a group of men wearing balaclavas arrived at the shop and broke the security doors. Their small spaza shop is situated in Madombidzha Zone 2 and serves as a home for Daniele and his younger brother, Ephraim.

The robbers were armed with knives, hammers and other sharp objects. They entered the shop and demanded money. According to Daniele, one of the robbers took a swipe at him with a knife, but fortunately it missed his chest, only ripping open his shirt. “They then climbed over the counter and made their way to the till. My young brother, who was in the shop with me, was crying for help,” he said.

One of the robbers attacked Daniele once more and sliced open his hand. He was also hit on the head with a heavy object, which caused a lot of bleeding. While this was happening, another robber was punching his brother.

The two Ethiopian men put up a brave fight, but the robbers overpowered them and stole the bit of cash they had. The robbers also took all the airtime vouchers from the shop before fleeing.

The police spokesperson, Brig Motlafela Mojapelo, said that a case of robbery at a business had been opened and one suspect had been arrested. He appealed to members of the community who may have information about the crime to contact them.