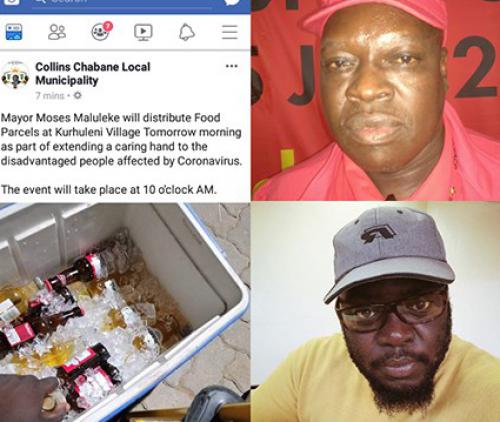 The long knives are out for one or more of Collins Chabane Municipality’s communication officers, following a very distasteful post on social media the past weekend. In the post that appeared on the municipality’s Facebook page, the announcement was made that the mayor was going to distribute food parcels at Kurhuleni village on Sunday. The post was accompanied by a photo of a cooler box filled with alcohol.

The municipality issued a statement earlier this week in which they condemned the “false impression and condescending disposition” of the employee who had posted the offending photo. The picture caused a lot of reaction on social media and was removed not long after being posted. The initial excuse (that was also removed) was that the municipality’s Facebook page had been “hacked”.

The “hacking” excuse was clearly not accepted by readers, who pointed out that the officials still seemed to be very much in control of the page.

On Sunday, the municipality’s communications manager, Mr Isaac Nukeri, issued a statement saying that the municipality was aware that “[unscrupulous people were] prowling around as part of the mayhem that accompanies the struggle against the onslaught of Corona virus (sic)” in the country.

“To (the) utter disgust and dismay of the Municipality … one of its employees projected a cooler box riddled with a concoction of alcoholic beverages, therefore furnishing a wrong impression that such are food parcels meant for delivery to the community by the Honourable Mayor,” Nukeri stated.

He added that the employee’s behaviour lacked “the high standard of professional ethics expected to be promoted by all employees of the Municipality”. He apologised on behalf of the municipality and promised that “decisive action is being taken by the Municipality against the affected employee”.

Several media enquiries asking for more clarity on who exactly was responsible for the embarrassing incident were sent to the spokespersons the past week. The two spokespersons are Isaac Nukeri and MJ wa Azania. Several calls were made, but these were not answered.

On social media, the responses were less sympathetic and many who commented on the offending post asked for heads to roll, pointing fairly directly at the communication officers.

Sayi Khalanga Baloyi said: “Liar, liars have no place in our democratic society. One should manner (sic) and act responsible for publishing wrong content and comments...”

Risimati Ngobeni reckoned that the problems arise because communication officers are political appointments, but “lacks political education and political language” and act in a childish manner.

Ndhuma Makamu agreed, saying “This is really sad. The level of professionalism and formality in the municipality's communication unit is shockingly very low. There is a clear evidence of lack of capacity. I think the Council must rescue the situation and put people who know what they are doing. The current group is immature, emotional, and irrational and lacks integrity.”

A journalist from Giyani View replied: “What’s happening about this page? Whoever is running this page must be fired. How can you paste (photos of) alcohol during the lockdown? Please gents be serious, you are disrespecting us.”

Ian Shithembiso Chauke raised a serious concern about the municipality’s hide-and-seek attitude, where they are seemingly protecting the identity of the employee who posted the offensive photo. “Loko swi mitsandza tshikani. Who's the employee? Who's the communications manager/municipal spokesperson? Miburisa masipala wahina vafo. This is not SRC offices where u can lie and get away with it. U must be punished for posting nonsense and for lying that you were hacked. Friendship must come to an end.”