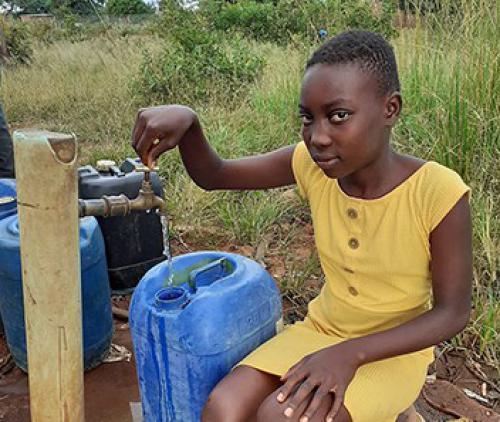 Dyondzo Ngwenyama (12), from a family of 11 members, is relieved that the family might buy some bread instead of buying water this week.

The mooing of cattle and bleating of goats and sheep punctuate the stillness of the day at the rocky and hilly Khambele village (Tshikonelo). Hardly any people are moving about the streets, perhaps a sign that the residents are adhering to the observance of the national lockdown.

Headman Vho-Samuel Nekhambele sits in the shade of a tree, his stare is fixed on a dry communal tap. He has been sitting like this for the past three hours, waiting for the water to get to his village.

“We share the water valve with Phaweni village, and we understand that the water reached Phaweni some four hours ago, and we are expecting it to reach us anytime from now,” he said. “Once it reaches us, I’ll announce to the people to come out and fetch water from the tap, so that not everyone – including children – find themselves roaming the village unnecessarily, so that children might end up not caring about social distancing during this time of the coronavirus pandemic.”

He stated that, in the previous years, water used to get to them without any problems, but these days it has become hard, and they must wait for it for hours. “We understand that we get water from Xikundu; there’s a dam or reservoir there,” he said. “We share the very water pipeline with many other villages. But then it is sort of a heartache for us to go for over two to three weeks without water. Most of our people are unemployed, and they can’t afford to drill boreholes of their own.”

He adds that the only answer to the water problem in the village was for the district municipality to consider reviving an old borehole and set up a water station that would serve the entire village.

“We are about 20 households here, but then we stay on an isolated piece of land. So, it will be good for the municipality to arrange for the reactivation of the old borehole here,” he said. “This kind of old borehole reviving can be a good solution even to other villages as well.”

Meanwhile, a white hardbody bakkie arrives at the communal tap and a man and a lady, with two children, get off and exchange pleasantries with the headman.

“We are from Makhasa village, our dear excellency,” said the man, Mr Simon Maluleke. “We have 35 empty bottles and we ask to fill them with water. We have no water at all in our village. We normally survive as informal businesspeople, but now we are not earning a living because we are observing the lockdown. We only broke it now to come here to fetch water.”

Makhasa is situated some seven kilometres away from Khambele village. “We are going to fill all these 35 empty bottles and they will last us until Friday,” says Mrs Ivy Maluleke. “We used R150 to put some fuel in the car, which might have been used for some food in the home. When we voted the ANC into power, they told us water was free – but now we have got to buy that ‘free’ commodity.”

Vhembe District Municipality’s spokesperson, Mr Matodzi Ralushai, said that Khambele fell within the population-explosion area where fewer villages used to be in the old days and now new villages were mushrooming, hence the need for more water. “Those people should be receiving water from Xikundu, but then I’ll check as to what the problem is, and then we’ll see how better they can be assisted.”

He adds that the suggestion of making the use of a borehole water system in villages which have fewer households is a good idea worth looking into, from the side of the municipality. “I will check with our technical team to find out about Makhasa so that, if there’s no water at all, they are catered for in any manner for the meantime.”