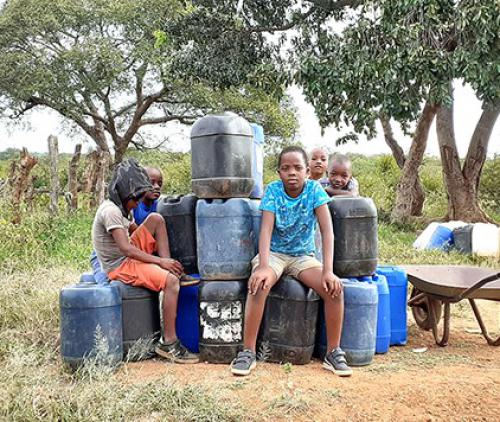 Some children await their turn to fill their empty bottles with water at Phaweni village on Monday.

The struggle for water at Phaweni continues

Driving along the R524 Punda Maria, just some two kilometres from the Xigalo/Malamulele T-junction, the first thing that catches the eye on the left is a large group of children and women, surrounded by hundreds of empty 20-litre bottles.

This is Phaweni village in the Collins Chabane Local Municipality, one of the many villages of Vhembe District Municipality where water remains a scarce commodity. The village had last had water available from its three communal taps a week and a half ago.

“We are worried that even today the water that is running in that main tap will not be enough for all of us,” said a lady, who carried 10 empty bottles while heading home. “I am giving up, because I have been there at the tap for the past four hours, but the tap is only releasing a thin flow of water, like a little boy peeing.”

The children played around and lined up the empty bottles and buckets, and they appeared to know who was next in line because no confrontations occurred among them. They were all from different households, and no social distancing was being observed.

Another resident, Ms Joyce Tsanwani, said that when she heard that the main tap was humming - the sound that suggests the water will soon come - it had come as something to marvel at, only because it normally took more than a week or two before the taps ran with water.

“Even if they run with water, not all of us manage to get it,” she said. “We resort to buying from our neighbours, something that is quite difficult for many of us because most of us here are unemployed and we rely heavily on social grants for subsistence.” Tsanwani said they were five family members in her home, and that they normally spent more money on water than on bread or relish to eat with pap.

Ms Olga Makasela pointed out that, unless the municipality brought water in tanks, the community was still going to suffer a lack of water and the non-existence of social distancing.

“It normally takes over three hours before one’s turn to fill one’s buckets comes,” she said. “So, if you are a parent and you come here to wait in the queue for three or so hours, then your children will spend the rest of the day on empty stomachs. As a mother, you need to be home and mind the motherly business, so one is forced by circumstance to send children to fetch water, and this is the space where social distancing is not practised as children mix together here.”

Vhembe District Municipality’s spokesperson Mr Matodzi Ralushai stated that, just like Khambele, Phaweni village fell within the population explosion area that had fewer villages or residents in the old days, which means that water use was not as high as in the present day. “We will get into the matter to ensure that they get water,” Ralushai said. “Our technical team will advise on this matter.”