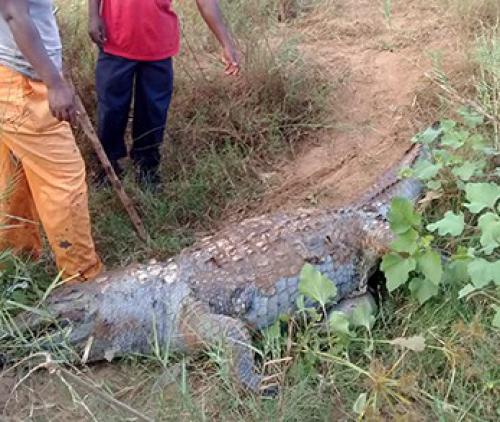 A community leader in Ha-Matsika village, Mr Layton Mabalani, points at the dead crocodile, while some rangers look on.

A huge dead crocodile was found in the Luvhuvhu River that passes by the rural villages of Ha-Matsika, Tshikonelo and Malavuwe outside Thohoyandou on Sunday.

Rumours going around are that the river might be poisoned and, according to a community leader at Ha-Matsika, Mr Layton Mabalani, the villagers are worried that they might be drinking contaminated water. He said that the dead crocodile had been discovered by a shepherd looking for cattle.

The shepherd informed the communities, who went to the river in larger numbers and later removed the dead crocodile from the water. However, a sharp object had apparently been used to remove some body parts.

According to Mabalani, about two years ago, four dead crocodiles were also discovered “and we never established what caused their death”.

Another community member at Malamangwa-Tshamutavha, Mr Pono Netshamutavha, who has a field near where the crocodile was found, said some days ago, a bad smell seemed to come from the river.