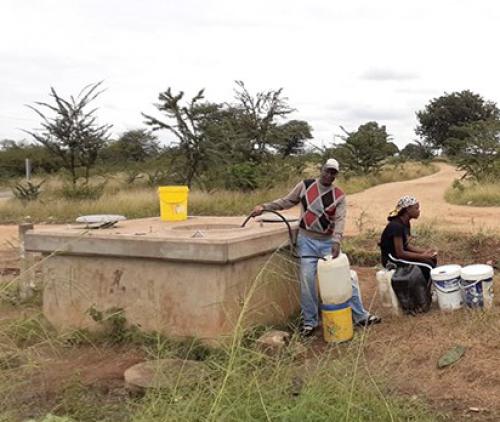 Residents fetch water from the manhole.

Residents risking their lives to get water from manholes

Residents at Ndengeza RDP section have been risking their lives by getting deep down into a manhole to access clean water along the R578 road near the Middle Letaba Dam.

They have been without running water for more than two years and they have taken to fetching water from manholes. Others carry their washing on wheelbarrows to come and do washing right by the main road at the mainline valve holes.

“Honestly speaking, we have been without water for as long as we can remember,” said an unemployed mother of six children. “Then, from some two years ago, we started getting our water from these manholes.”

The residents appear to have tampered with the valve to access the water via the pipe that they connected to the main pipe valve and tied an elastic around it, so that it does not leak.

“We are aware that accessing water from these manholes is dangerous to us and our children, who sometimes come here to draw water without any supervision,” said another one. “But we are left with no option since we have no government that cares for us.”

One youth uttered blatant vulgarity in referring to the municipalities who have a negligent attitude towards people. “We are nothing – can you imagine life without water?” he said. “I came home now from Gauteng where I am studying towards a degree in environmental sciences. Each time when I am away, I worry about my sickly mom who must send my young siblings to fetch water from this manhole. Now that I am back home, it’s much better because I can do it myself.”

A father of four children, who ekes out a living through odd jobs, says that residents are worried in that they live right at the foot of the Middle Letaba Dam and the huge pipeline delivers water to faraway villages right under their eyes. “This slips our understanding,” he said. “We stay right here at the dam, but we have never enjoyed the fruits of this dam.”

Vhembe District Municipality’s spokesperson, Mr Matodzi Ralushai, stated that the Middle Letaba Dam had never had ample water. “It’s one of the lowest-level dams in the district and as such we are unable to pump water to the people,” he says. “If we are forced to pump water from a dry dam, we will only be messing up the water pumps by forcing them to run with mud and sand.”

He added that the place around the dam fell within the so-called “dry area”, and that it would take some years before residents could get water from the Nandoni Dam, which has plenty of water. “Our plan is to reactivate the old boreholes,” he said. “As for now, they will get water from tanks. However, residents must stop interfering and tampering with the manhole systems; it’s both a criminal offence and dangerous to their lives.”