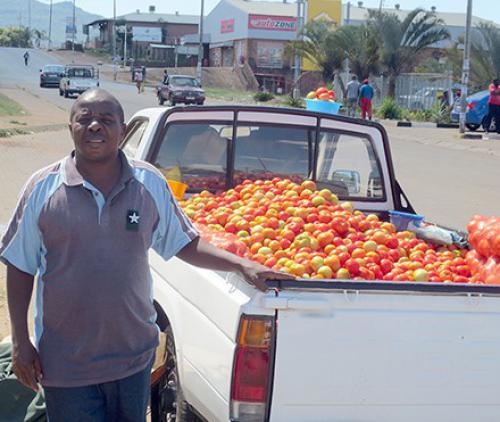 “Thanks to the Minister of Cooperative Governance, Dr Nkosazana Dlamini-Zuma, and Makhado Municipality for throwing us a lifeline. We were stuck as from day one of the lockdown,” said some informal traders in Louis Trichardt.

Makhado Municipality as of Tuesday, 7 April, had already issued 40 permits, but only three informal traders were back to their normal selling points. Two of them were not comfortable to be interviewed.

Mr Norris Phaswana from Madombidzha spoke to Limpopo Mirror and said, “I really thank the minister for considering informal traders. This is our bread and butter. If we do not sell, it means we go hungry. Since day one of the lockdown it was very hard for me to feed the family.”

Phaswana sells tomatoes opposite the Premjee shop along Kruger Street. He claims he made a loss of almost R3 000 since the lockdown began.

“Before the lockdown, I had ordered tomatoes and some onions for almost R3 000, but very little was sold. Usually I get good business on a Friday and Saturday, but since the lockdown I could not do anything. I had to throw away the tomatoes since they had all gone rotten,” said Phaswana.

After the news broke that informal traders could go back to selling, Phaswana visited Tshilwavhusiku Police Station to get some clarification, but he claims the police officers were not in any way helpful.

“This came as a surprise to me since they ordered me to leave the police station, yet I wanted only to get full information on how to get the permit,” he claims.

On Monday, 6 April, Tshivhengwa drove to Makhado Municipality for a permit application. He collected the processed permit on Tuesday. He urged all those who are looking for tomatoes for funeral purposes to visit him at his usual spot in Kruger Street.

Asked how he would deal with customers coming to buy from him, Phaswana said, “I only started selling today. I will not allow anyone near me. They tell me what they want, and I will give it to them. If I get money today, I will buy sanitising spray for my customers and for me.”