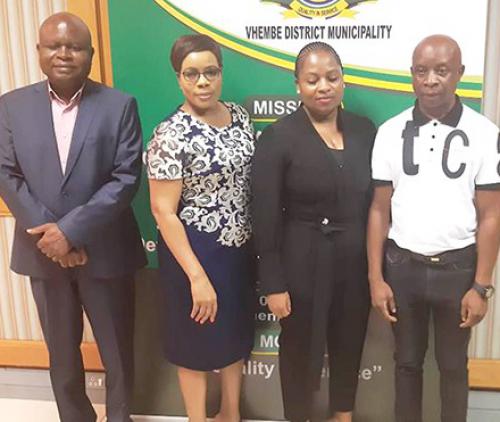 The new chief financial officer (CFO) of the Vhembe District Municipality (VDM), Ms Mulatwa Thangavhuelelo, assured the public that she would be working towards the improvement of a clean audit as she assumed duty on 16 March.

“I will work to the best of my ability, with a positive attitude and the excitement of being given the opportunity to contribute to one of the biggest district municipalities in the province. I am looking forward to building a strong reputation at the district municipality in relation to financial management,” said Thangavhuelelo.

Thangavhuelelo was speaking on Friday at the mayor’s boardroom in an interview with Limpopo Mirror after the executive mayor of the VDM, Cllr Dowelani Nenguda, and the municipal manager, Ms Sylvia Ndou, had welcomed her and the acting general manager technical services, Mr  Eddy Ferdinand Chauke, to be part of the working team the district municipality was eagerly waiting for.

According to Thangavhuelelo, she hopes that they will be working as a team and that this will help the district municipality to improve the annual audit, which helps them to move from a disclaimer to a qualified clean audit.

Her appointment was confirmed during the recent special council sitting at the VDM Council Chamber in Thohoyandou. The position of CFO had been vacant since November 2018 after the resignation of former CFO Mr Nyiko Mchavi.

Chauke said issues of water services and sewage must be attended to with immediate effect as VDM was the water services authority, aiming to deliver clean water to the communities.

The executive mayor of VDM, Cllr Dowelani Nenguda, was over the moon with the appointment of the new CFO, saying the district municipality could not function effectively without filling critical positions.