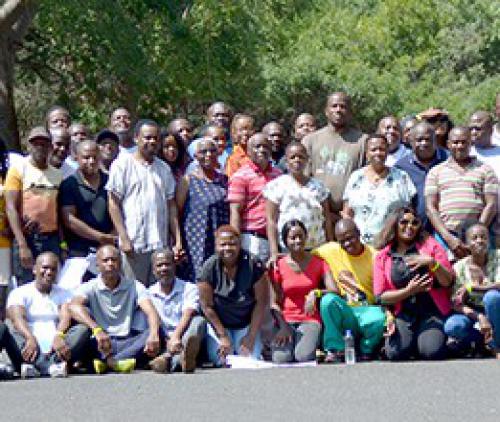 Some of the beneficiaries of the Mulambwane Communal Property Association were photographed with different stakeholders shortlty after the three-day workshop at Swadini.

CPA prepares to benefit from SEZ

“The land that you received through restitution is an asset that you must cherish, appreciate and manage well. We need to ensure that the lease that you will sign with the SEZ company or Limpopo Economic Development Agency (LEDA) must have both benefits and obligation between the lessor and the lessee.”

These were the words of Khosi Jeffrey Ramovha when addressing the beneficiaries of the Mulambwane Communal Property Association during a recent strategic planning workshop at the Swadini resort near Hoedspruit.

“The lease is the foundation of your future and needs to be drafted properly,” he told beneficiaries, after it had emerged during the gathering that the Mulambwane CPA were not happy with the current lease that they have with LEDA. They had even declared a dispute with LEDA, so that they could forge a way forward to reaching a better agreement.

He informed the beneficiaries that the illegal occupation of land by some of the CPA members or any other person would not only chase investors away from their land but also hamper development.

“I urgently recommend that an interdict by the CPA must be considered to stop the illegal demarcation,” he said. “I wish to also recommend that the CPA, after finalisation of the master plan of the SEZ, commission a site-development plan on the land outside the SEZ site-development plan and demarcate a residential site where all beneficiaries must be allocated stands with title deeds.”

He stressed the point that the CPA must ensure that proper governance in both the CPA and its holding companies will take place. “All decisions of the CPA must be taken by the majority of the members present and the executive committee must ensure that such decisions are implemented,” he said. “Should the CPA take note and implement the above recommendations, it is guaranteed that the Mulambwane CPA will be the richest and best managed CPA in Limpopo, if not South Africa.”

Mulambwane CPA's acting spokesperson, Mr Mashudu Muabve, said that they were aiming to benefit from the SEZ project. “Our interest is mainly in SEZ projects where we want to see it benefiting our people and the entire region in general,” Muabve said.

At this stage, the CPA has claimed 96 farms through the years and at least 14 of these claims have so far been successful. The farms are: Anthrobus, Coniston, Lekkerlaag, Delft, Dreyer, Malapchane, Somme, Driehoek, Steenbok, Mapane Ridge, Vanderbyl, Sand Stone Edge, Joffree and Battle. Of these farms, Anthrobus, Lekkerlaag, Dreyer, Somme, Steenbok, Vanderbyl, Joffree, and Battle are all leased to the LEDA for the SEZ developmental project.

The Mulambwane CPA's executive committee had requested the University of Venda's School of Agriculture to assist with some of the challenges it is facing, through their Community Engagement Committee. During the strategic planning meeting, a university team comprising six academic staff members and five students facilitated the workshop.

Prof Joseph Francis, director of the Institute for Rural Development (IRD) at Univen, said that separate groups of youths (male and female), adults (men and women) and a CPA executive were established. “Each one of them was facilitated by either Univen staff or students who had been well prepared to carry out the tasks,” he said. “Using the results of the engagements, we are compiling a draft strategic plan, which the beneficiaries will consider. Furthermore, we are packaging a comprehensive report of the entire workshop,” he said.

Francis said that they had used the workshop as a learning platform for post-graduate students. “Facilitating the workshop was in line with the university's community-engagement thrust, which should yield an impact in society (in this case, land restitution),” he concluded.