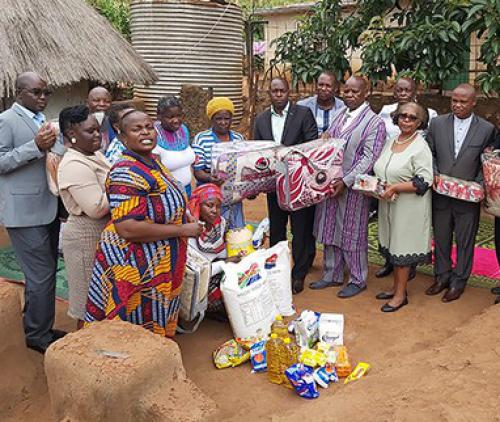 Life will never be the same for granny Elisa Phophi, following the promise of a free house by Thulamela Mayor Avhashoni Tshifhango.

Tshifhango, together with members of his executive council, Speaker Humbulani Mulovhedzi, Chief Whip Grace Mahosi, Municipal Manager TE Maluleke, traditional leaders and local councillors visited Phophi (65) at her home, Tshithuthuni, last Friday morning before an imbizo that was held in the area.

After confirming that Phophi is staying in an old but neat house with her two children and two grandchildren and is struggling to make ends meet from her old-age government grant, Tshifhango pledged that the municipality was going to build a new house for her and the family.

He said the house, which will be built soon, would be covered with tiles on top, with a ceiling and tiles on the floor.

In responding to the unexpected gesture, Phophi said she was out of words to express her gratitude. “I am happy about these groceries, but I am happier about the house I am going to get. During rainy days, my house changes into a dam as it becomes filled with water,” said a very excited Phophi.

Vhamusanda Vho-Thandululo Tshivhase said he was happy that one of the needy families had their prayers answered. He urged the municipality to do more for the people. He said the municipality was well represented in ward 28 by Councillor Nompi Phalanndwa, whom he described as a good servant of the people.

During the imbizo, Tshifhango was told about incomplete RDP houses, with five that are kept on hold and some that have not been completed for the past 10 years. The community said some houses still needed for the electricity to be switched on since the completion of electrification. They also raised their concerns about damaged roads that were caused by heavy rains. The community said water shortages were a serious problem in the area.

A need exists for speed humps or a tarred road to avoid accidents that are also taking people’s lives.

The issues of crime, especially housebreaking that mostly happens during load shedding, and unemployment of the youth who are not armed with formal training and other qualifications, were also raised.

In his response, Tshifhango said damaged roads would be fixed immediately. He also said he was touched to see that “our people still walk distances to access health services like clinics. We will forward all concerns of issues that do not fall under us to relevant offices in the district and province.  Remember, the launching of the District Development Forum will help us to answer to your concerns and needs quicker than before.

“We know that water is also a major concern here, but we will liaise with our district municipality to make sure this issue is solved,” said Tshifhango, who also handed food parcels to other needy families during an imbizo held at Remember My Promise Sports Grounds.