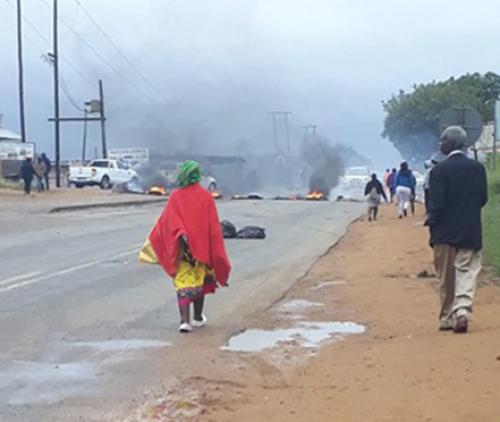 The commuters walked long distances when the road was closed with burning items.

Commuters from different areas around Elim and Hlanganani were left stranded on Tuesday, after local hawkers and community members blocked the entrance road to the area and to shops, preventing taxi drivers operating under the Hlanganani Taxi Association from using the roads.

The protest action by hawkers was apparently caused by a fight over routes. The hawkers complained that taxi owners chased away buses to prevent them from operating in the rank. Passengers were allegedly forced to walk eight kilometres to catch other transport to go to work or other places.

Passengers are starting to fear for their lives amidst the on-going war between taxi associations and bus operators. Commuters who travel long distances say they have become collateral damage in this dispute over routes.

Business and services came to a standstill, with no shops open.

One of the hawkers, Ms Meltah Mulaudzi, said that they had approached the Hlanganani Taxi Association to allow the buses to operate, “but they didn’t listen to us”. She said that as the hawkers they lived by selling fruit to the commuters, but since January they had not made any profit as the buses were chased away and “other hawkers who are next to where the buses operate don’t allow us to sell next to them”.

One of the bus drivers, who wanted to remain anonymous, said that different bus drivers were being stopped by the taxi owners since January and instructed to offload their passengers. "We are willing to sit down and talk to the Hlanganani Taxi Association, but if they refuse then there is nothing we can do, because we are still going to operate on this route," he said.

He said they were "sick and tired" of the taxi association's intimidation tactics. He said that they were not illegally operating on someone else's routes. "We operate to Johannesburg, not locally," he said.

He called on the authorities to resolve the conflict before innocent people died. He said there was no way the bus drivers were going to back down. He said that they lived in constant fear of being killed, following the resurgence of taxi violence. “These taxi associations are actually making business difficult for us by snatching away our customers and, at the end of the day, we gain nothing.”

One of the passengers, Mr John Manganyi, said commuters continued to put their lives at risk, because buses were safer than other means of public transport. “The fear is always there. What the industry doesn't understand is that these fights affect us more than taxi operators. We are caught in the middle of a conflict that has nothing to do with us,” he said.

Manganyi said they feared more shooting incidents would follow and that innocent bystanders might get hurt or killed. “The parties should sort out their issues in a civilised manner. We don’t want to get hurt. All we want is to reach our destinations safely.”

The chairperson of the Hlanganani Taxi Association, Mr Abel Khosa, said that the association was worried because the bus companies were operating like taxis. He said that they did not stick to the allocated time frames and ferried commuters any time of the day.

“We apologise to commuters for what has happened. We will resolve the problem with bus companies,” he said.