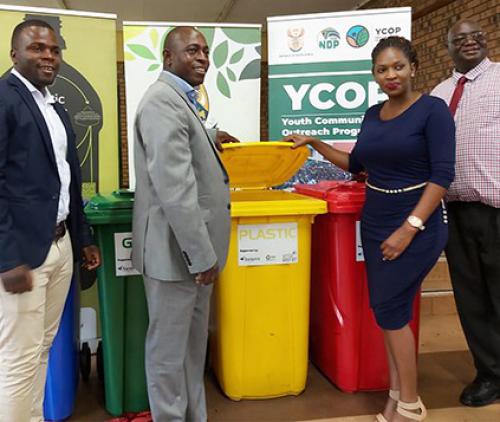 Thulamela Local Municipality has received a major boost in its quest to remain clean through the donation of 200 recycling bins from Petco.

The handing over of the bins was made at Tshedza Comprehensive School last Wednesday afternoon.

According to Ms Tlou Sebola of Petco, the bins are meant to help the municipality to separate in different bins line paper, glass, plastic and cans. She added that this was the second of its kind in Limpopo, following the one in Mogalakwena, to help Thulamela to maintain its status as a clean municipality.

Sebola said the bins that the municipality was going to hand over to different schools would also help to create jobs through local recycling companies that would be allowed to come and collect the waste.

During the function, pupils from Tshedza rendered poems encouraging people to look after nature.  Some, such as Ankonisaho Ramabulana, who won two carry bags from the department of environmental affairs, showed their knowledge about recycling during quiz sessions.

The Department of Environmental Affairs, which was also part of the event, said good waste management followed the 4 Rs: reduce, reuse, recycle and recover as well as avoiding illegal dumping and littering.

Items that can be recycled include paper (cardboard, newspapers and magazines), glass (containers, jars and bottles), plastic (bags, containers and bottles), and metal (food and drink cans), tetra pack (foil-lined containers/cartons such as milk and juice boxes) and polystyrene (white takeaway clips and food containers).

Every ton of glass recycled saves 1.2 tonnes of raw materials, aluminium cans are 100% recyclable while one ton of recycled paper saves 3m³ of landfill space.