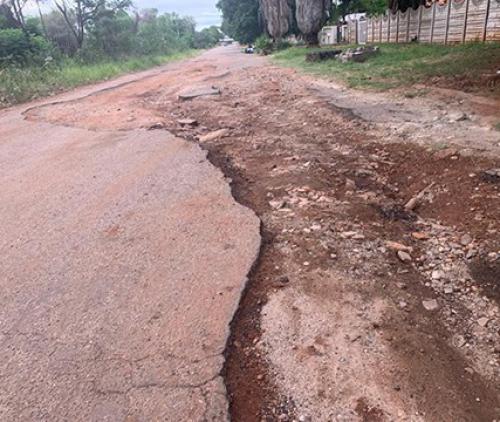 The roads in Musina are now worse after the rain.

Flooding affects many in Vhembe

The rains that poured across the country since February 10, especially in Vhembe, has robbed the district of one life, while many were left homeless and some of the bridges and roads were destroyed.

According to Ms Tshilidzini Nthambeleni, manager for institutional capacity and response and recovery of the Vhembe District Municipality (VDM), one person died after being struck by lightning at Gunda village outside Tshilamba in Mutale.

In Thulamela, more than 10 families were left stranded after their houses collapsed because of the rain, while seven bridges were also damaged. The affected bridges are from Tshipako-Thenzheni, Maheni-Tshanzhe, Tshitavha-Mahunguwi, Lambani-Vhurivhuri, Vhurivhuri-Mubvumoni, Dzwerani-Dzondo and the one between Itsani and Manamani.

In Collins Chabane, only four houses were reportedly affected by the floods while Makhado Local Municipality also recorded two houses that were damaged in Ha-Mutsha and Phadzima (Mazhazha).

No record exists of affected houses in Musina.

Nthambeleni has also revealed that 40 tents were issued to the four municipalities.  Food parcels were given to the affected families, while the Department of Public Works has committed to repairing the damaged roads and bridges as soon as they can.

Nthambeleni said most of the bridges had been overflowing during the rains, which had made it difficult for the community, especially motorists, to travel. However, she said, the situation had come back to normal since the rain had stopped.

Nthambeleni appealed to community members to avoid crossing bridges that were overflowing during heavy rains. She also advised parents to monitor their children, so that they did not play in stagnant water as they might drown or contract diseases.