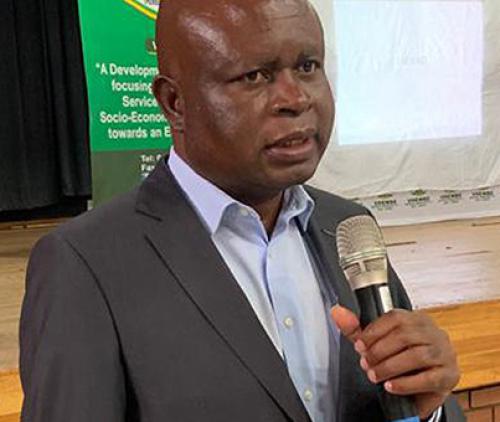 Nenguda appeals for help against vandalism of water resources

Vhembe’s executive mayor, Cllr Dowelani Nenguda, is appealing to community members to stand up against the vandalising of water resources. This comes after the closing of purification plants at Nandoni Dam by community members from Ha-Mutoti and Ha-Budeli in the last week.

The disgruntled community members chased away operators at the dam and closed the plants, which left hundreds of households with no water in different parts of Vhembe.

The community members were demanding compensation from the Department of Water and Sanitation for the land, houses and planting fields that they lost when the dam was built some years back. The community are accusing the department of taking too long to pay for their loss as per the recommendations made by former Public Protector, Lawrence Mushwana, who had said they must be compensated per hectare.

The situation came back to normal after two days of stand-off, following interventions made by municipal officials. It led to an urgent meeting that also involved the leaders of the protesting community and the department.

Nenguda said he was happy that the situation had gone back to normal and community was now getting water. “We strongly condemn the actions of these community members who blocked the water supply from Nandoni because they were unhappy with the department.  Water is a national commodity.  When we have problems, it is wrong to tamper with water resources as we will be violating other people’s rights.

“These people had a valid reason to differ with the department of water and sanitation, but they did not have the right to tamper with the rights of other ordinary citizens. A person can get arrested for blocking a water resource.

“The other worrying factor is that these people did not consult us about their grievances before they blocked the water supply. What the community did there was totally wrong.  You cannot burn a clinic, a school or destroy a road because you are not happy about a certain service from a different arm of government. We urge community members to air their grievances without destroying the little that we have,” said Nenguda.

“In villages like Merwe, royal leaders and the community had agreed that they were not going to tolerate any theft of water resources or vandalism.  Many more communities have also pledged their support to us about this,” said Nenguda.

The executive mayor also encouraged government department and community members to inform the municipality about shortages of water or burst pipes in their areas as soon as they could.

He said most community members were now starting to have faith in the municipality.  The municipality also supplies water through tankers whenever there is a problem of water supply. “Where we have challenges or fail to deliver water to our people, we always try to inform them while we work on addressing such issues,” said Nenguda.