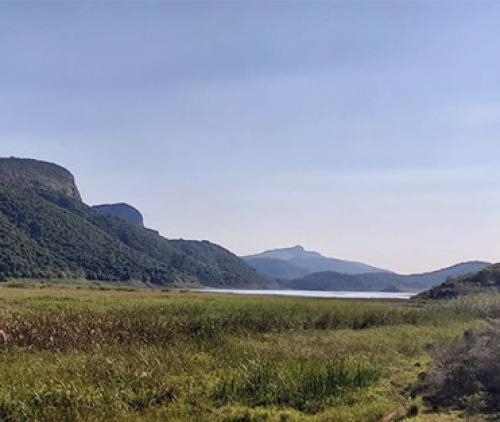 A site view of the once great Lake Dzivhafundudzi, situated at Tshiavha village outside Thohoyandou.

The Vhembe District Municipality, together with the departments of Environment, Forestry and Fisheries, Economic Development, Environment and Tourism in the province celebrated World Wetland day at Ha-Khakhu village last Friday.

The event, which was held at Khakhu Secondary School’s sports grounds, was preceded by a visit to the great Dzivhafundudzi Lake in Tshiavha village by the delegates.

During the visit, the fact that the lake was being destroyed by soil erosion, caused by people who are ploughing around it, was highlighted.

Celebrated under the theme Wetland and Biodiversity, the event was aimed at creating public awareness about the role and benefits provided by wetlands in people’s lives.

Mr Khorommbi Matibe, who was representing the Department of Environment, Forestry and Fishery, said World Wetland Day started in 1971 during a world meeting. He said that he was happy that community members from different parts of Vhembe, including leaders from the three municipalities of Thulamela, Makhado and Musina, together with traditional leaders, businesspeople, religious leaders, Sanco, NGOs, organisations and unions and other community structures were attending the event.

He emphasised the importance of children’s taking the message of the value of protecting wetlands to their respective communities.

Matibe said, nature, especially wetlands, faced different challenges that threatened their lives.  “This day is meant to remind people and educate them about the importance of wetlands. People must know the important role that wetlands play in our everyday lives,” said Matibe.

He said that wetlands were discovered to be some of the essential parts of nature that were being threatened by human behaviour, especially pollution.

The Department of Education said it was ready to teach learners about the importance of preserving wetlands and other natural resources, while the Department of Agriculture urged all community members to be involved in protecting nature.

Pupils perform a tshikona dance during the event.