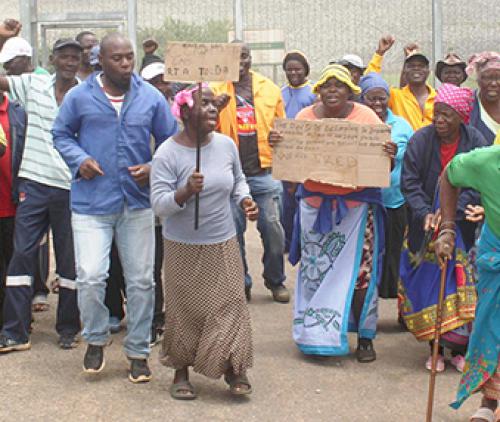 Angry community members in Ha-Mutoti and Ha-Budeli want the Department of Water and Sanitation to pay them for their arable land that destroyed when the Nandoni Dam was built.

Angry community members in Ha-Budeli and Ha-Mutoti villages near the Nandoni dam outside Thohoyandou have dismissed the water operators and closed the Nandoni Water Purification Plant, leaving many communities in the Vhembe region without clean water from their taps.

They also closed the gate leading to the purification plant and they are demanding that the Department of Water and Sanitation compensate them for their arable land, houses and mealie fields that were submerged in the water when the Nandoni Dam was built.

Speaking to Limpopo Mirror during the second day of the action on Tuesday, the chairperson of the Nandoni Complaints Resolution Committee (NCRC), Mr Solomon Baloyi, said life was hard without money and the department was dragging its feet in paying reparation for their damaged houses that were destroyed during construction of the dam. They must also be compensated, according to the report by Mr Lawrence Mushwana, a former Public Protector, which stipulated that they must be paid hectare by hectare.

“Since 2004, we were paid some small amount of money, thinking the situation would improve. We used to depend on ploughing the arable land to earn a living and support our families. It is painful that land we depended on was taken without better compensation,” said Baloyi.

According to Baloyi, they want the Minister of Water and Sanitation, Ms Lindiwe Sisulu, to come and address them and not send officials of the department “who take us from pillar to post”.

He added that the angry communities would not destroy schools, roads and clinics, but they would come and sit at the gate leading to Nandoni dam, the place where their land was situated before the construction of the dam.

“We have many promises from the Department of Water and Sanitation regarding housing destroyed and arable land, but they have not been fulfilled. We resolved to come to the closed gate of the dam, singing and chanting, demanding that our rights be addressed,” he further said.

The spokesperson for the Department of Water and Sanitation, Mr Sputnik Ratau, said no need existed for the communities to close the access to water, a precious resource, while the negotiation was still in the process.