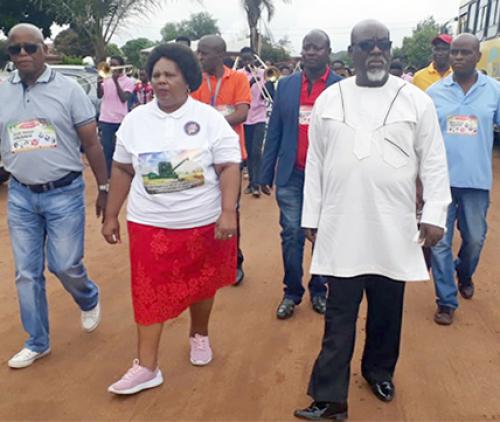 Churches must be more visible in their community

The Amazing Grace Assembly (AFM Madombidzha) held a march from Muromani to Zone 2 in the village as a way of showing the people that 'this is the year of harvest'.

The church's public relations officer, Pastor Tshiila Ravhuhali, said that the church wanted the residents and those driving along the Sinthumule-Kutama road to realise that to consider coming to church was a necessary and good thing for them.

“We are living in times where a church within the village or town needs to be more visible above any other entity in that it is in the church where morals and a way of salvation are taught to the people,” he said. “Our Vhembe District is filled with acts of violence as the crime rate keeps rocketing, and the only way to effectively curb the scourge of violence is to instil a sense of morality in our people.”

He added that the church also had some programmes aimed at educating the youth, and they also offered free matric extra classes to ensure that the youth performed well academically. “Our programmes include drug- and alcohol-abuse awareness and social-development initiatives where we distribute sanitary towels to young women and food parcels to the needy,” Ravhuhali said.

A guest in the church, Evangelist Edward Mahlakgane, said that it was high time that the church made itself more visible in the communities. “The political parties are using strategic and radical methods to convince people to vote them into power and most people eventually get enticed to vote after hearing the politicians' speeches,” he said. “So, we also need to be radical and vocal about the Kingdom of God, so that many people can see the value of having Christ in their lives.”

The church's senior pastor, Bishop Thomas Liremi, thanked all stakeholders, including Vhamusanda Ntsundeni Sinthumule, who had participated in the march. More than 500 people attended the event.

The event was a pre-launch of the upcoming mass crusade that will be held from 23 to 29 March at 18:30 daily. The main speaker in the crusade is Evangelist Ananias Ralekholela from the Free State.