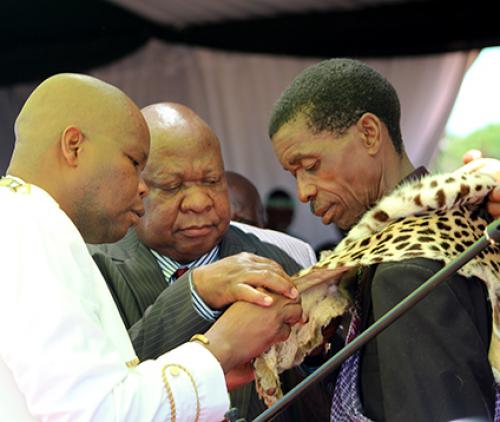 Thovhele Vho-Mutheiwana Joseph Mugivhi was inaugurated as the new leader of the Mugivhi tribe at the Ha-Mutsha Sports Grounds last Friday. His installation as traditional leader follows a long battle that had even found its way through the courts.

In 2012, members of the royal family appointed Mviseni Vincent Mugivhi as senior traditional leader. This decision was not supported by a part of the family, who believed that customary practices were not followed to determine who should be the successor.

In 2015, members of the family group, led by Mutheiwana Joseph Mugivhi, filed papers in the High Court to oppose the decision of installing Mviseni as the leader. The matter was subsequently investigated by the Commission on Traditional Leadership Disputes and Claims (CTLDC). In 2018, the Department of Co-operative Governance, Human Settlements and Traditional Affairs recommended that Mutheiwana Joseph Mugivhi be installed as the new leader.

Last week, the group of family members who supported Mviseni Vincent Mugivhi filed an urgent court application in an effort to stop the installation of Mutheiwana. The application, however, was dismissed as the court reckoned the decision had been taken in 2018, making the application not urgent.

Last week’s ceremony to install a new leader was attended by, among others, Khosi Khulu Vho-Toni Mphephu Ramabulana, the MEC for Coghsta, Basikopo Makamu, and many chiefs from around Vhembe.

During the event, Ramabulana, who performs the duties of the king of the Vhavenda, said that community members must respect the new chief. He added that the chief must focus on developing the area. “We are appealing to the community to continue working closely with the newly installed chief to develop the Kutama area,” he said.

He added that the community of Ha-Mutsha must also support the newly inaugurated chief for the development of the area. “I want to see development in this area. I always encourage good relations between traditional leaders and the municipality,” Mphephu Ramabulana said.

In an interview with Limpopo Mirror, Thovhele Vho-Mutheiwana Mugivhi indicated that he was looking forward to working together with the community members of Mugivhi. “I am also going to encourage traditional dances to restore the traditional values of the Vha-Venda people,” he said, adding that he was also ready to work with the police in terms of reducing crime in the village.