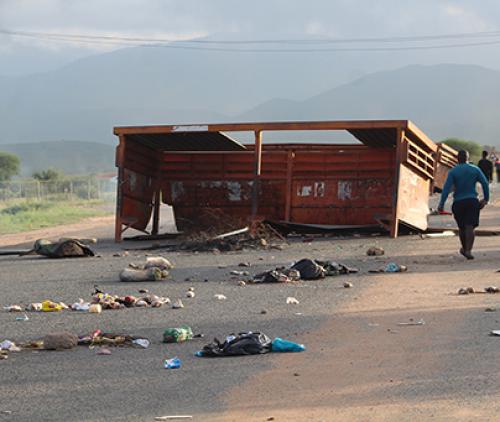 Even a bus shelter was broken down and used to barricade the road.

Residents of Gogobole and surrounding areas of Sinthumule went on the rampage and barricaded the main road from the villages to Louis Trichardt on Wednesday.

The protesters were blocking roads using stones and all sorts of rubble. The reason for the shutdown was for the release of the three suspects who had been arrested in connection with the burning of five houses and two cars at Gogobole and Tshiozwi.

The residents are also angry about the bad state of the road from Louis Trichardt and in the Kutama area, as well as the shortage of water.

Some of these obstacles were set alight to prevent motorists from getting past. Thousands of commuters were left stranded and many workers did not report for work and school children were forced to stay at home because of the barricaded roads and the lack of transport.

Shops in the area were closed for most of the morning. Angry members of the community even broke down a bus shelter and placed it in the road. The residents went to the T-junction at Madombidzha and were joined by the Madombidzha community.

The unrest also follows the ongoing problem of housebreaking and theft in the Sinthumule area, with residents seemingly deciding to take the law into their own hands.

Residents appealed to the SAPS to maintain a policy of zero tolerance towards all crime. They said a lot of crimes had occurred in the area and in most cases the suspects were known by the community. Residents also asked the police to work out a plan with time frames and to stipulate how the community could become involved in pro-active crime prevention.

Until the issue has been resolved, people from outside areas are warned to avoid the roads leading to Sinthumule and Kutama. Brig Motlafela Mojapelo of the SAPS in Limpopo confirmed that they had arrested three suspects after some community members had set alight five houses and two cars. They were charged with arson, public violence and malicious damage to property.