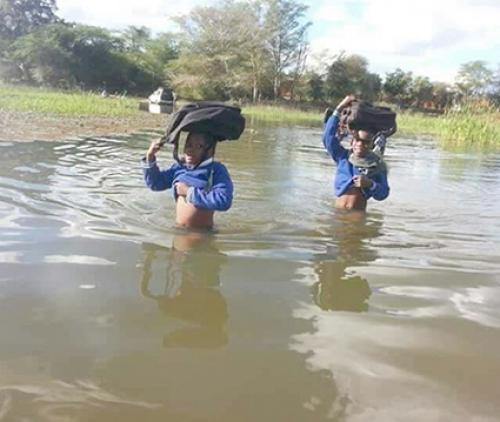 Pupils cross a river in the Niani area.

Heavy rains in parts of Vhembe have caused heavy strain on local infrastructure as it washed away bridges and damaged houses in areas under the auspices of the Collins Chabane and Thulamela Municipality.

Pupils were not attending school as workers and teachers failed to report for duty on Tuesday. Many of the region's dams and rivers are overflowing, following the heavy downpours.

Several families reportedly lost groceries, furniture and other belongings. Motorists who are staying in mountainous areas were forced to park their vehicles near the main tarred road, because they were unable to use the damaged and slippery roads.

One of the residents from Mukununde in the Nzhelele area, Mr Israel Mamatho, said they wanted the government to build them a proper bridge and to upgrade the rainwater-drainage system in the area. “It rained heavily, and our houses were flooded, our furniture was damaged. We told the municipality that the problem is the lack of a proper bridge. We don’t sleep at night when it is raining like this; we want some help. We were allocated these residential sites by the municipality. Let them construct a proper road, because we know that all this havoc is caused by the small bridge that is not big enough to carry high volumes of rainwater.”

The spokesperson of the Vhembe District Municipality, Mr Matodzi Ralushai, said the damage caused by heavy rains in the district had not yet reached a point where the district disaster unit could get involved. Ralushai said that the affected communities were now forced to use alternative roads to get to work or school and run everyday errands. "Most of the bridges have structural problems, while others are under water," he said.

"We have sent out a disaster team and we are visiting the different areas that have been affected by the floods. We are pleading with parents to warn their children not to swim in the dams or play near the rivers, because there are a lot of crocodiles," said Ralushai.

Ralushai told Limpopo Mirror that some of the families had been left homeless after their mud huts had collapsed, but at that stage he had not received any reports of people injured. He warned residents living close to rivers and streams to evacuate to a safer place or higher spot when the water levels rose. “When you cross a flowing river where the water reaches above your ankles, turn back and use alternative routes. Never try to walk, swim or drive in swift-flowing water as it can sweep you off your feet. Do not drive over a low-water bridge if the water is flowing strongly across it,” he said.