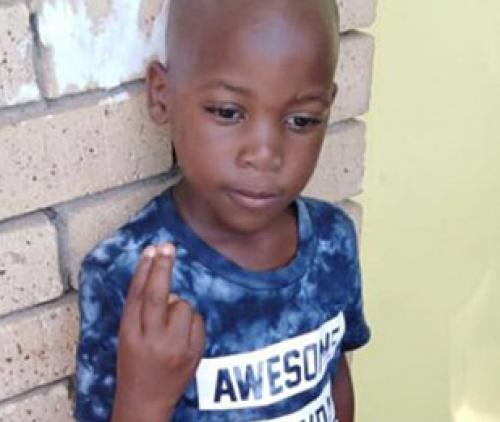 Rendzo Valoyi drowned in the borrow pit left by a contractor.

The family of a six-year-old boy, Rendzo Valoyi, are traumatised and still battling to get answers from the Collins Chabane Municipality after their son had drowned in a borrow pit at N'wamatatani village.

Several borrow pits were left wide open and unrehabilitated by a construction company that was hired to do the N'wamatatani ring road a year ago, which remains incomplete.

Rendzo and other two children found themselves playing around the borrow pits where the children are normally attracted by an excavator abandoned by the constructor. On that day, about two weeks ago, the three children had allegedly started swimming in one of the borrow pits. Two of them, Rendzo included, started to experience difficulties in the dirty water. The third one, who is eight years of age and happens to be Rendzo's cousin, rushed home to alert the elders about the situation at the borrow pits.

“When family members and residents arrived there, they got into the water and searched for the two children,” said family spokesperson, Mr Lucky Mabasa. “Unfortunately, Rendzo had already lost his battle against the water that choked him. The other one was placed on the side of the water and he had a lot of water flowing out of his ears.”

At a later stage, the family informed the municipality about the tragedy in the hope that it would take full responsibility. They are of the view that the municipality is to blame, since it had failed to instruct the construction company to rehabilitate the place upon completion of the ring road project.

“Even though the mayor, Cllr Moses Maluleke, had come to the child's memorial service, the municipality has so far failed to cooperate or directly address the matter,” he said. “The family is both distraught and disappointed with the fact that the municipality is taking this matter lightly. There are incessant rains now as we speak, so do we have to lose more kids?”

Neither of the other two children had received any form of counselling up to this stage. The borrow pits are situated about 100 metres away from people's homes, and they are easily accessible to children while they continue to pose a danger to their lives. “The saddest part is that the municipality says they do not know whom that excavator belongs to, and our children continue to get attracted by it and go there, climbing and playing on it,” Mabasa said. “When they are tired, ideas of diving into the water come into their minds.”

Rendzo was laid to rest on Saturday. He was in Grade 1 at Joe Mabedle Primary School.

Media inquiries were sent to Collins Chabane Municipality's spokesperson, MJ Wa Azania. Each time the journalist contacted him, he would answer that he was busy working on a report or statement on that case and promised to email it “shortly”. At the time of our going to press, Wa Azania had not responded yet.