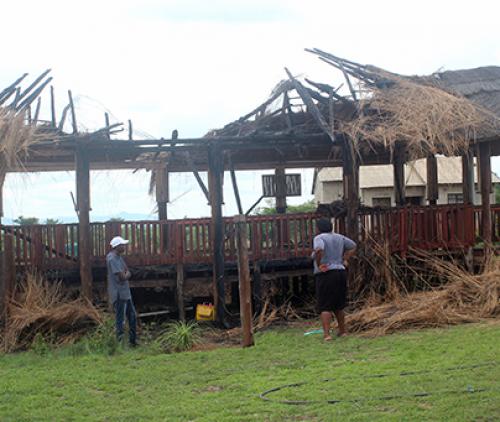 Firefighters managed to extinguish the fire at the lapa.

The conference hall and lapa at the Graceland Resort at Matsila village were destroyed in a fire that broke out two weeks ago. The owner, Mr Norman Matsila, and his family watched in disbelief as the roof of the building went up in flames. The damage to the building is estimated at R900 000.

The visibly shocked Matsila said that the fire started at about 01:00 on Saturday morning, 27 January. He suspects the fire might have been caused by an arsonist, but police investigations are continuing.

“I received a call at about 01:00, saying that the conference hall was on fire. I rushed there and I nearly fainted when I saw the flames mercilessly devouring our property. I then called the emergency services, who rushed to scene,” he said. Last week, the debris of burnt-out chairs and tables, including the decoration materials, served as testimony of the devastation.

Shortly after the fire had been reported, people from the village gathered at the homestead but could do nothing. When the firefighters arrived at the scene, they doused the flames.

According to eyewitnesses, they only saw the hall on fire but did not know where the fire had come from. “I felt as if I was dreaming while I watched helplessly,” Matsila said. “I am now appealing to any good Samaritan to come and assist me in renovating the roof.”