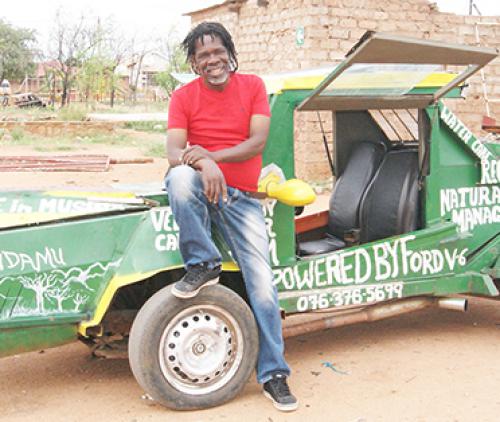 Self-taught “engineer” Rekkie Moyo of Musina, photographed with the car he built from discarded scrap material.

“South Africa is full of possibilities.” These are the words of self-taught “engineer” Rekkie Moyo of Musina, who has just completed building his second car from discarded scrap material.

Moyo first made a name for himself when he built a 2010 Soccer World Cup car, which was featured in the FIFA World Cup book.

In 2012, he built a very comfortable, battery-powered wheelchair, which he donated to a local disabled man.

His latest car, which is being powered by a Ford V8 engine, is the centre of attention wherever he drives. “I recently drove it to Thohoyandou and it was very difficult for me to return, because everyone wanted to take a picture with my unique car. This was a clear indication that people love what I do.”

He said his two-seater car went by the name of Kandamu, which is a combination of the initials of the names of his children. “This is a very unique initiative and I wanted it to have a unique name. Interestingly, most of the operations in the car are electronic and they use buttons,” he added, while starting the engine with a button that is attached to the driver’s door.

He added that both the bonnet, boot and panoramic roof were electronic. “I just press buttons, and everything opens up. As a person who loves music, I have also fitted a loud sound system, so that I can always feel at home when I drive the car.”

Although some people can just see it as an ordinary car, Moyo said he wanted to encourage people to take good care of nature and recycle unused resources whenever possible. “This is the reason why I painted it green and boldly displayed the text Water care, recycled project and Natural resource management. When people read these texts when the car moves, to me  this is a very big opportunity to raise awareness on the preservation of the natural resources. Most of the time I drive it to schools, shops and various public areas to raise awareness.”

He encourages other talented community members not to give up on their dreams, despite their poor financial background. “I had no single penny in my pocket when I started building this car two years ago. Using my brains profitably, I managed to persevere until I completed this project now. You can also accomplish your dream if you work hard and dedicate enough time to realize your potential.”

He added that his next major project was the construction of a helicopter, for which he had already started assembling the parts.