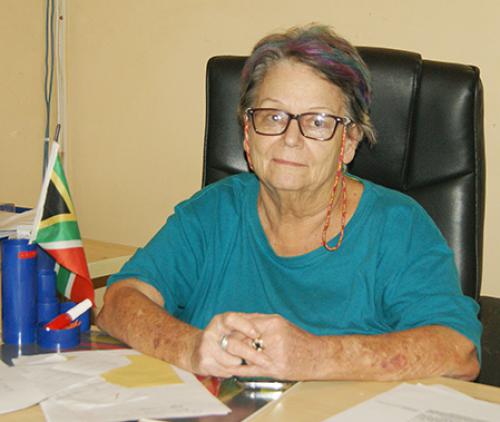 Ms Fiona Nicholson, a mentor of the SVEP

The Songozwi Victim Empowerment programme (SVEP) has seemingly stopped operating, amidst conflict between the Makhado SAPS, a former chairperson of the SVEP and the management of the organisation. The Department of Social Development (DSD) was also requested to intervene.

The non-profit organisation was set up to try and assist victims of, among others, family violence. For the past few years, Limpopo Mirror has reported on the NPO’s battled to survive with limited funding and a leadership vacuum.

In November last year, the SVEP’s management scheduled a general meeting to try and plot a way forward. The meeting was disrupted, however, by Mr Tshinyalani Matumba, who claimed that the meeting had been arranged without his approval and that he was still the legitimate chairperson of the organisation.

According to Ms Fiona Nicholson, a mentor of the SVEP, the organisation is currently in a crisis. “The Makhado community has been denied victim support for well over a year,” said Nicholson, who is also a co-founder of the Thohoyandou Victim Empowerment programme (TVEP). She managed the TVEP between 1998 and 2018.

Nicholson further claimed that the Makhado SAPS station commander had suspended the SVEP’s services late last year, until a new board is elected. The SAPS and the SVEP have been in partnership since 2010 and the SVEP utilized the police’s house in Breda Street, Louis Trichardt.

The station commander at the Makhado SAPS did not want to respond to media enquiries and referred these to the provincial spokesperson of the police, Brigadier Motlafela Mojapelo.

Brigadier Mojapelo said that a meeting had been held on 3 December last year. The SVEP’s programme manager, Ms Benita Kaldine, had been present at this meeting. According to Mojapelo, a resolution was taken to suspend the partnership between the Makhado SAPS and the SVEP.

Brigadier Mojapelo said that the Makhado SAPS had a victim-friendly room that was up and running and would be utilized as a shelter for victims of abuse, should the need arise.

Nicholson has written to the Department of Social Development, urging them to intervene to ensure the election of a new board. “I hereby request the intervention of the DSD to ensure that a new board be elected without further delay, following appropriate procedural protocols,” reads her letter.