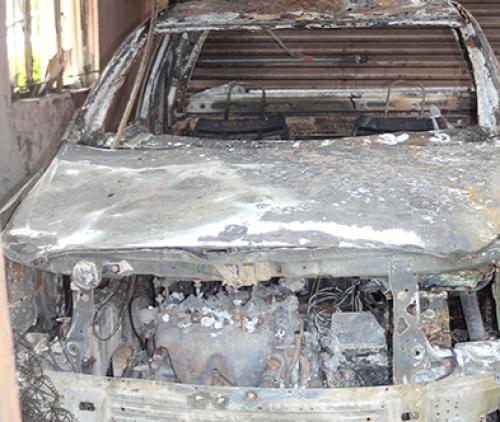 The car of Muyahabo Sadiki was set alight.

The houses of a 38-year-old woman and her 59-year-old mother in Ramahantsha were set alight by angry community members on Monday night. The two are accused of pouring petrol over a young man and setting him on fire.

The incident, where the 23-year-old Tshimangadzo Masuwa was seriously injured, made headlines last week. He apparently was the lover of the much older Muyahabo Sadiki. Such young lovers are commonly referred to as “Ben 10s” in local circles. Masuwa was allegedly accused of cheating and was attacked by the woman and her mother. He was seriously injured in the altercation and had to be rushed to the Louis Trichardt Memorial Hospital for emergency treatment. He was later transferred to Polokwane for treatment at the provincial hospital.

Muyahabo Sadiki and her mother, Johanna Sadiki, were arrested after the incident. They appeared in the Tshilwavhusiku Magistrate’s Court last week, facing charges of assault and attempted murder. Johanna Sadiki was released on bail of R2 000. The two appeared again in court on Monday and the case was postponed to 18 February.

After Monday’s court hearing, angry community members from Ravele started to block access roads with stones and burning tyres and went to the suspects’ houses at Ramahantsha. Rumours were doing the rounds that the victim, Tshimangadzo, had died in hospital. Two houses and a car were set on fire. The fires damaged the roofs and the walls of the houses and clothes, beds, blankets, a stove, fridge and all the furniture were destroyed.

Masuwa said that he was shocked to hear rumours that Tshimangadzo was dead. “We were told that everyone across the area knew that he was dead,” he said. “People should just stop this rumour,” he urged. Masuwa also said that the family distanced themselves from the arson attack on the two houses and car.

The police confirmed that a case of arson has been opened, but at this stage no one has been arrested. The investigations are continuing.