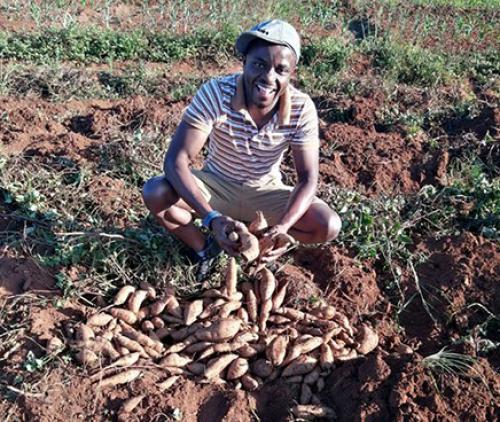 Paul Matsego is a determined young man who has found his niche in farming. This young epitome of success is already farming at a professional level.

“I was still young when I joined my parents and grandparents on the farm,” he said. “I had a very wonderful experience because I would see them planting and harvesting. When I grew up, I realised that I could also do this.”

Later, Paul moved to another village, Tshiulungoma, and then to Tshiombo.

Along the way he had forgotten about his earlier involvement in farming and focused on school and living. However, in 2016, he saw people from his village selling sweet potatoes, muxe, mutshaini and mealies at Malamulele and people bought their goods.

“What surprised me was that there were no young persons among them; it was only elderly people. Then I thought: 'Why are youths not involved? This is good work where one still makes a profit!'”

At the same time, it dawned on Paul that his grandfather's farm had been dormant since he had passed away some years ago. No family members were making use of it at that time.

“I called my grandmother and proposed to make use of a portion of the farm and she didn't hesitate to grant me permission,” he said. “She even said that she believed in me, and those were the words that encouraged me.”

Soon Paul had turned the portion of the farm into a field gleaming with green vegetable produce. He also has goats, chickens, pigs, ducks, rabbits, and turkeys.

He has since developed his market via social media platforms such as Facebook and WhatsApp. He also moved around Malamulele with his products at the back of his bakkie or truck, hailing the quality of his products, and people flock around him to buy.

“Today I supply to retail stores and supermarkets – but I don't usually supply to them because they negotiate prodigious discounts that affect my profit negatively, so I prefer the open, public market,” he said.

He had created both permanent and part-time jobs on his farm for many people, including youths who want to venture into farming whom he is mentoring.

“I want my kids to play with animals or crops at a young age, not with plastic toys from foreign lands. I want them to learn the skills of working for themselves,” he said.